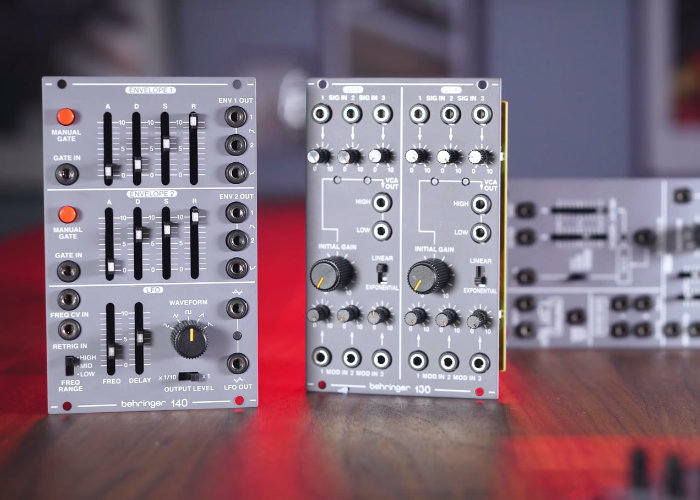 Behringer has unveiled its new modular synthesiser System 100 range offering Eurorack version of Roland’s System 100m components, offering affordable versions of the classic synthesisers. What’s the introductory video below to learn more about the System 100 range which has been showcased at this year’s NAMM 2020 event.

Synthesiser modules within the Behringer System 100 range include :

112 dual oscillator with 3 waveforms, PWM and two sync modes
121 dual filter with 3-channel mixer per filter
130 dual VCA, again with dual 3-channel mixers
140 dual envelope has 3 outputs per ADSR plus a built-in LFO that can be triggered and phase synced
173 gates module comes even with four gates that can switch audio and 6 quad buffered multiples
297 has a dual portamento controller plus two independent CV mixers
150 brings a ring modulator, 2 noise generators, syncable LFO and a sample and hold generator
172 module delivers a 6-step phase-shifter, an analog delay, an LFO and a gate delay
305 is an output module a four-band parametric EQ, a 4-channel mixer, line and separate headphone output and even a tuning oscillator
182 there is a powerful analog sequencer with either dual 8 steps or 1-16 steps and tempo, portamento and gate time controls
110 is a complete synth voice with VCO, VCA and filter in a single module

Unfortunately, no information on pricing or worldwide availability has been released as yet by Behringer, but as soon as information comes to light, we will keep you updated as always.