When electrified objects go into the cooking pot, they send current through the pot to an onboard Arduino, which then creates tones and beats for that object, that can be further manipulated using the extra dials and knobs on the side. Watch the video after the jump to learn more about the Beatoven project and see it in action. 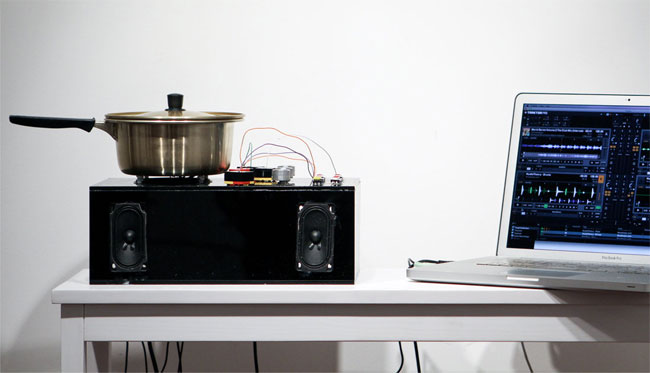 “When I was in U.K., I missed my Korean food, so I decided to cook a Korean soup in my kitchen,” Jan tells Co.Design. “While boiling the water, I realized that the water boiling sound is playable by the lid of pot. It is just like filtering a sound effect by using a DJ mixer. So I translated that idea into cooking sound.”

At the moment the Beatoven is more of a proof-of-concept rather than a fully finished concept, and Jan is hoping to modify the design even further to work with real food.

“For instance, if kids put unhealthy ingredients into pot, the sound will clash with no harmony like pure noise,” he explains. “But If they put in healthy food, then the sound will be groovy with harmony.”

More information about the Beatoven concept is available over on the Viktography website.