Following on from other Microsoft research projects we have featured here on Geeky Gadgets such as the Augmented Reality Mirror. Microsoft has unveiled a new development project called the Beamatron.

The Beamatron is a Kinect enabled augmented reality projector that can project an image on to any surface and make the image react to the contours of that surface. For example an augmented reality car can drive over object placed within the room but recognise when it is going up or down slopes. Watch the video after the jump to see the Microsoft Beamatron in action. 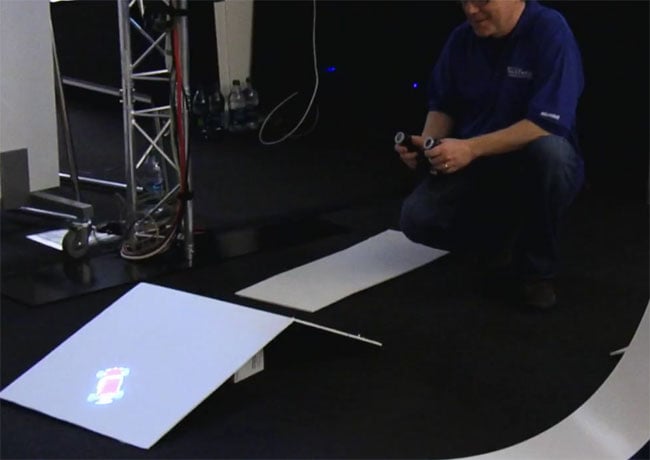 The prototype has been developed by Microsoft to generate new ways to reveal notifications and other graphics to the attention of a user by automatically placing the graphics within the user’s view. Microsoft researcher Andy Wilson explains:

“Beamatron is a new, augmented-reality concept that combines a projector and a Kinect camera on a pan-tilt moving head. The moving head is used to place the projected image almost anywhere in a room. Meanwhile, the depth camera enables the correct warping of the displayed image for the shape of the projection surface and for the projected graphics to react in physically appropriate ways.”