Say hello to the Harry Potter Infrared Battling Wand. Yes, anyone who plays with these shall embarrass themselves. No, the lasers don’t summon real spells. 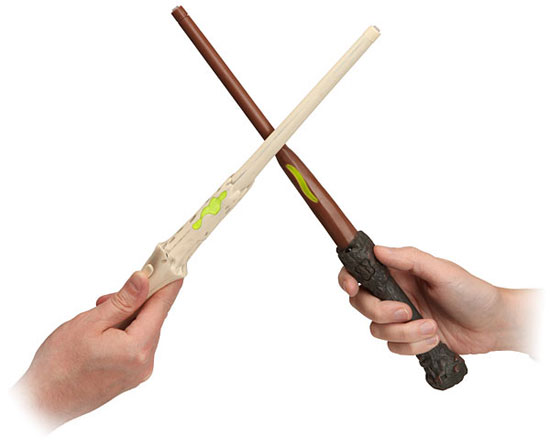 Still, kids and the kids-at-heart shall be filled with wonder once they get their paws on these character-specific laser tag wands. If you’ve got a crush on Hermione or dig either Ron or Harry, perhaps even sympathize with Voldemort, there’s a wand for every type of fan!

These 14-inch long wizard weapons are powered by three AAA batteries and blast out “spells” via movie sound effects. If that wasn’t cheesy enough each wand also lights up. Now if you still want extra cheese you can’t enunciate those spells you know by heart (the sign of a true Harry Potter nerd) or make explosive sound effects yourself, saliva flying through the air included.

Since these $23 battling wands are but a Harry Pottered spin on the beloved past time that’s laser tag, we expect true believers willing to indulge their fantasies to the full and have a blast out-wizarding each other somewhere public, like a mall or office. You know, where the potential for embarrassment is high.

In fact, we think these toys are starved of awesome. How about everyone dress up as Spartans from Halo (like these guys) and then go to war armed with wands. Great idea, no?