Gamers who have also got a spare Raspberry Pi mini PC kicking around might be interested in this awesome Raspberry Pi arcade stick created by ArcadeForge who have also been working on their PiJamma Project. Which is an add-on PCB for the Raspberry Pi which has been created to simplify connecting retro hardware, such as old game controllers or jamma arcade bartop or cabs. 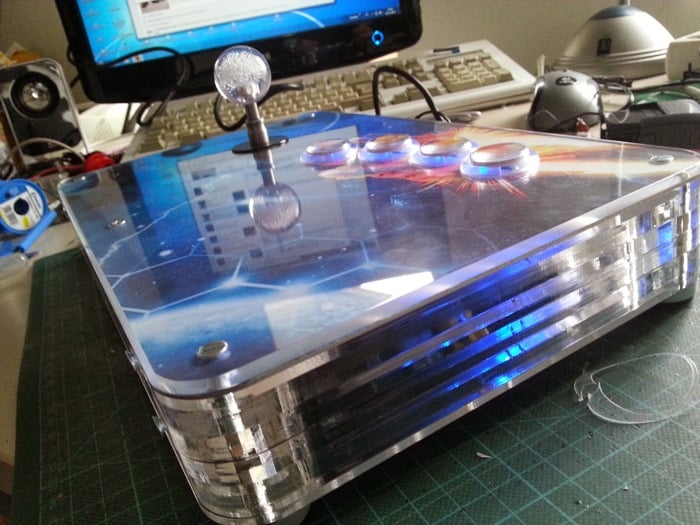 The Raspberry Pi arcade stick can be seen in action below and has been built using a Raspberry Pi with 32GB SD card, packed with emu stuff plus WLAN Adapter, together with a PiJamma PCB for connecting Arcade Controls. The Hack A Day website explains:

“The Pi and the PiJamma sit inside a custom-made acrylic enclosure and hook up to the buttons and joystick above. Rather than try to fit the Pi directly against a side panel for access to the various outputs, [Jochen] rerouted the USB, HDMI, and headphone jacks and arranged them into a tidy row on the back side of the box.

The top piece of the enclosure consists of a sheet of aluminum wrapped in custom artwork, with an additional sheet of acrylic on top for protection. [Jochen] also modified each of the arcade buttons to include LEDs that illuminate the buttons’ acrylic holder, and the case itself appears to have been cut into slats on each side to provide better ventilation.”

If you fancy building your very own Raspberry Pi arcade stick jump over to the ArcadeForge website for full instructions and step-by-step photos to guide you through the process. Raspberry Pi enthusiasts may also be interested in our essential guide to Raspberry Pi displays and HATS.