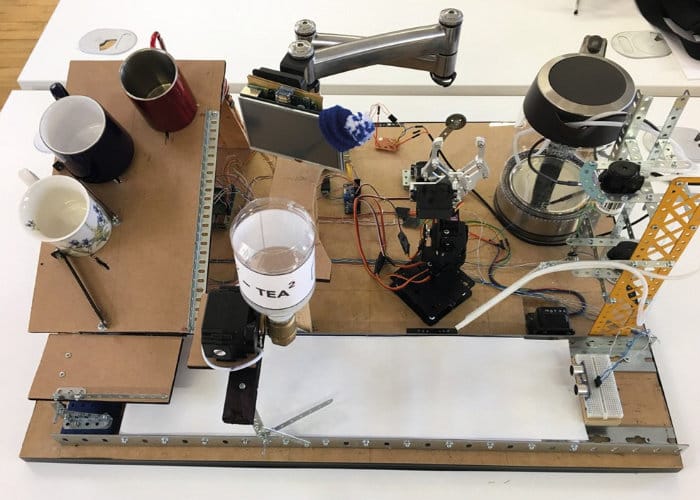 Raspberry Pi enthusiasts searching for inspiration for holiday projects to create, may be interested in this awesome Raspberry Pi powered teas made featured on the official Raspberry Pi magazine website and featured on Channel 4’s recent documentary, Guy Martin Versus the Robot Car. As you can see from its interesting design as well as a Raspberry Pi plenty of sensors, robotic arms and structures constructed from Meccano have been used to create the unique brewing machine aptly named R2-Tea2.

R2-Tea2 has “two core components,” Sam continues: “The making robot [and] the chatbot, with language processing and basic AI.” The actual robot was based around the Pi, hooked up to a £12 Adafruit 16-channel PCA9685 PWM/servo driver board and two dual H-bridge motor drivers. As “the budget wasn’t huge” for R2‑Tea2, components needed to be cheap or easily sourced. “We had one script [to control the robot] that sequenced the firing off of all the separate control scripts, which were nothing more complex than sending high and low signals to the correct pins with the correct delays,” recalls Sam.

A Raspberry Pi teasmade was taken for a test run by speed junkie Guy Martin in Channel 4’s recent documentary, Guy Martin Versus the Robot Car. The Pi powered tea-making robot, ingeniously named R2‑Tea2, was designed and built by Huddersfield’s Running in the Halls (RITH), a design and development studio whose “primary focus is designing and developing web and mobile apps, games and installations” according to RITH co-founder and director, Sam Croft.

Jump over to the official Raspberry Pi magazine website MagPi for more information.  If you enjoy building Pi projects you might be interested in our comprehensive list of Raspberry Pi displays, HATS and small screens.