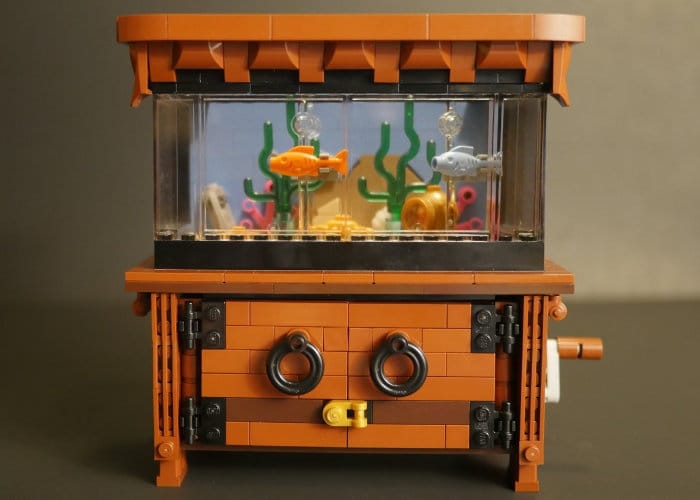 Master LEGO builder Mark Smiley has created an awesome LEGO Clockwork Aquarium, watch the demonstration video below to see the build in action. The LEGO project is part of the Lego Ideas contest and is in hopes to get 10,000 supporters, for more details jump over to the LEGO Ideas website by following the link below.

By turning the crank users can see colourful fish swimming around the tank in a large oval, a crab jumping up and down and a starfish that spins as fish swim by. “This dynamic LEGO Aquarium features fish that “swim” around the perimeter of the tank, a crab that jumps, and a starfish that spins as the fish pass by. This all happens by turning a crank which operates a smooth and robust mechanism built into the cabinet.“

“This has been a fun project and I am thrilled with how delightful the little aquarium has turned out.  I started out working on the mechanism.  I had tried many different methods for creating the movement, and this version of the mechanism proved to be the most robust and smooth.  I then moved on to the cabinet and glass work.  I wish there was a single piece of trans clear that could make up the entire front face of the aquarium, but the current part selection still yielded a nice result.  I’ll certainly be posting some updates along the way, but as it is, this is a solid, dynamic, and fun model. “

For more information on the build and to cast your vote towards moving the LEGO Clockwork Aquarium closer to production jump over to the official LEGO Ideas website by following the link below.