AT&T launched a new program in New York this week called Street Charge. The program has placed solar charging stations in and around the five different boroughs within New York City. AT&T’s plan is in part a response to the issues New Yorkers and other people on the East Coast had when power was out due to hurricane Sandy. 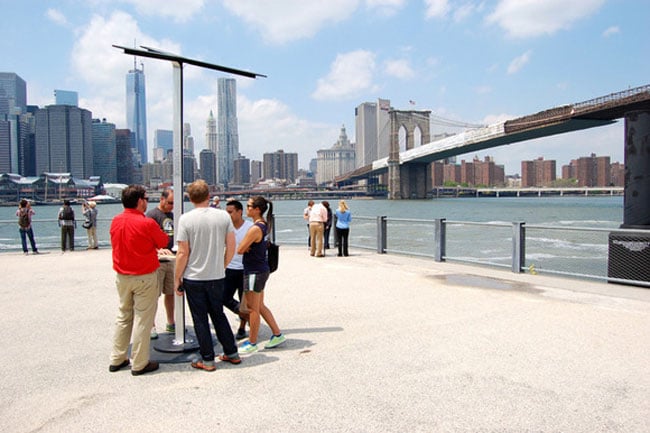 The Street Charge power stations have smartphone chargers with multiple connectors are able to accommodate most smartphones. Connectors include USB, micro USB, 30-pin, and lightning connectors for iPhones. Power gathered from the propeller-style solar panels on top of the charger kiosk is stored in lithium batteries to deliver power during the night.

AT&T worked with a company called Goal Zero to create the solar power stations. AT&T is offering access to the solar charging stations to New Yorkers at no cost. The wireless carrier says that the solar charging stations are part of its effort to keep New Yorkers connected. AT&T currently has four pilot locations in operation located at Union Square and Coney Island. There are plans for 25 locations to be operational by the end of summer.