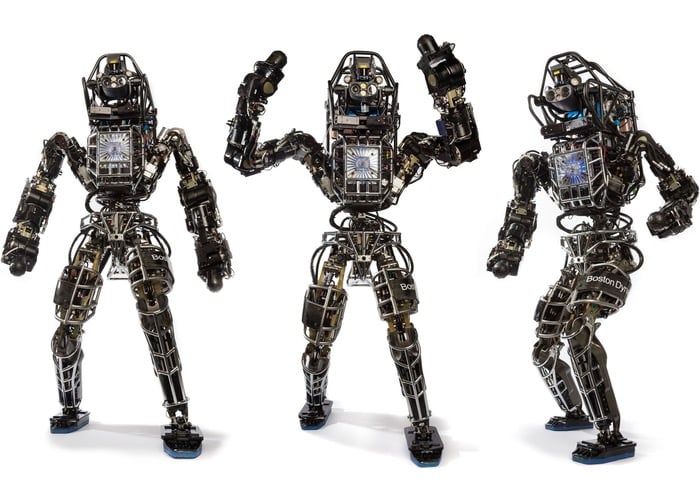 New software updates have been created and uploaded by The Florida Institute for Human and Machine Cognition (IHMC) to the awesome and a little creepy Boston Dynamics Atlas Robot.

The new Atlas Robot software update have been specifically created to enhance the Boston Dynamics bipedal robot’s ability to walk more like a human and can be seen in action after the jump.

Atlas is a bipedal humanoid robot that was unveiled to the public on July 11th 2013 and measures 6 foot tall or about 1.8m and has been designed to carry out a search and rescue tasks. One of the Google owned Boston Dynamics Atlas Robot hands was developed by Sandia National Laboratories, while the other was developed by iRobot.

“Using localization we are able to send a single footstep plan to the robot telling it to walk over the cinder blocks and repeat without adjusting any footsteps. In this video we show atlas walking over and back 10 times without any operator involvement.”

“The IHMC Robotics Team has performed exceptionally well in the multi-year, international Robotics Challenge sponsored by the Defense Advanced Research Projects Agency (DARPA). IHMC came in first in the initial computer simulation trial in June 2013, and second overall in the second phase, which featured using actual robots in field trials at Homestead Miami Speedway in December 2013. The next phase of the competition, featuring more advanced field trials, is scheduled for June 5-6, 2015, in Pomona, California.”