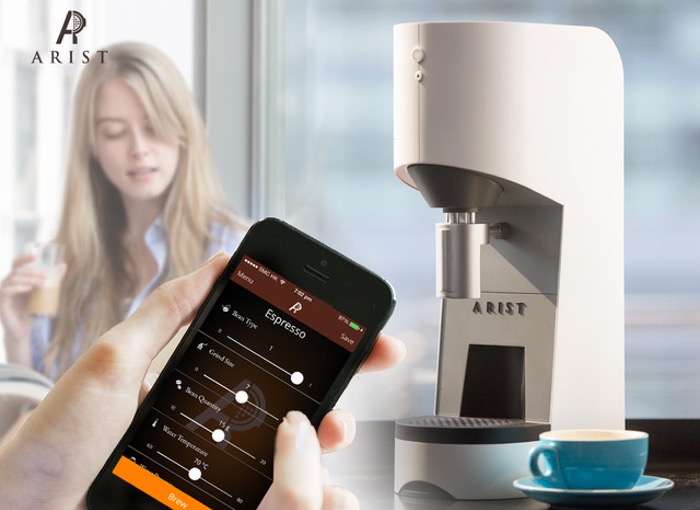 Coffee drinkers looking for a smartphone controlled coffee maker may be interested in a new next generation machine called the Arist which has been designed in San Francisco, California.

The Arist smartphone control coffee maker has been specifically designed to make coffees in the style of the world’s best baristas using the companion smartphone application, and has already raised over $200,000 on Kickstarter in just a few days.

The Arist was originally looking to raise $120,000 to take their concept into production, but with still 25 days remaining on their Kickstarter campaign, the next-generation coffeemaker set to raise plenty more pledges. Its creators explain a little more about the features of their new Arist coffee maker.

“Every type of coffee bean requires a specific way to extract the best flavors, depending on grind size, water temperature, pressure, water flow, ground weight, and more.  However, today’s machines brew every coffee bean in the same way; and that’s JUST NOT RIGHT.  So we created ARIST to give you the best flavors.

Traditionally, it’s the job of a barista to accurately brew any given bean into a perfect cup of coffee, but inconsistency is always a huge problem due to human error. Arist is made to brew coffee in a specific, precise, and consistent way.

All of these processes sound complicated, but Arist has simplified everything into a simple machine with an easy-to-use smartphone app, so you can download recipesand brew coffee like the best baristas at just the tap of a button.”

For more information on the new Arist coffee maker jump over to the Kickstarter website for details and to make a pledge starting at $299 to be one of the first to own the innovative coffeemaker via the link below.