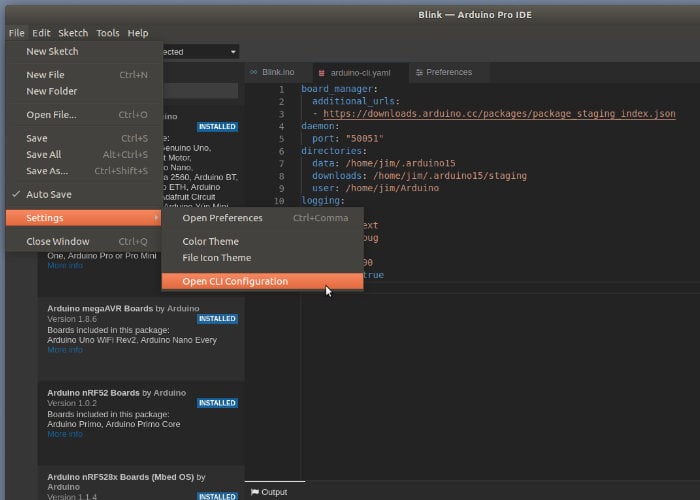 The official Arduino develop and team have announced the availability of the Arduino Pro IDE v0.0.6-alpha preview, allowing for the installation of third-party cores. The Arduino Pro IDE has been created to provide users with a simple, modern web app version of the Arduino IDE, with boards and libraries available directly from your browser without needing an install.

“We have developed a handy “Boards Control” feature to help you identify and configure third party boards. Try it out and give us your feedback. Highlights for this release include: Support for third party cores, UX improvements and Bugfixes.”

New and noteworthy:
• Support for the CLI configuration: You can install 3rd party cores.
• Support for the 3rd party core settings: You can specify board-specific settings from the menu. (#10)
• [experimental]: Boards Control: try it with Ctrl/Cmd+K Ctrl/Cmd+B search for a board, configure the actual 3rd party core settings, or pick one of the available boards.
• Support better unknown (3rd party) board detection. (#198)
• From now on, the boards-search is fuzzy. (#223)
• Switched to native grpc in the final app.

Fixes:
• The ZIP structure of the final app for Linux and Windows has changed. (#229)
• The serial monitor does not expect a \n. (#201)
• Toggling editor mode does not delete code. (#192)
• Fixed an issue with the editor-focus when opening multiple editors asynchronously. (#201)
• Application settings now stored under ~/.arduinoProIDE. (#184)

For more information and download links for the latest Arduino Pro IDE jump over to the official GitHub project page.