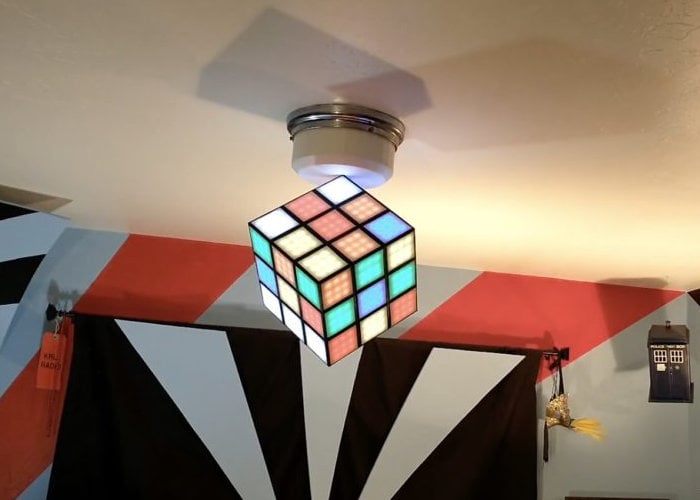 Arduino enthusiasts or Rubik’s cube solvers may be interested in a unique Arduino-controlled Rubik’s cube chandelier created by Stuart Gorman.

“This large 3D-printed chandelier looks exactly like the iconic cube, except that each section is lit by LEDs instead of covered with a sticker. Those are WS2812B individually-addressable RGB LEDs controlled by an Arduino Mega board. People usually choose the Mega when they need a lot of I/O pins, but in this case Gorman picked the Mega because it has lots of RAM to work with. That RAM is necessary for handling the complexity of the Arduino code that the lamp is running.”

“The lamp has a few different LED effects modes, which are selectable through a smartphone app that connects to the Arduino via a Bluetooth module. Static colors can be set to each face or it can flash random colors. But the exciting modes replicate traditional Rubik’s cube play. The first starts with a solved cube and then endlessly rotates random faces, like most people do when they attempt to solve a Rubik’s cube. The second mode will actually solve the cube, which it does by playing the first mode in reverse. This chandelier looks fantastic and is a lot of fun to watch in action.”