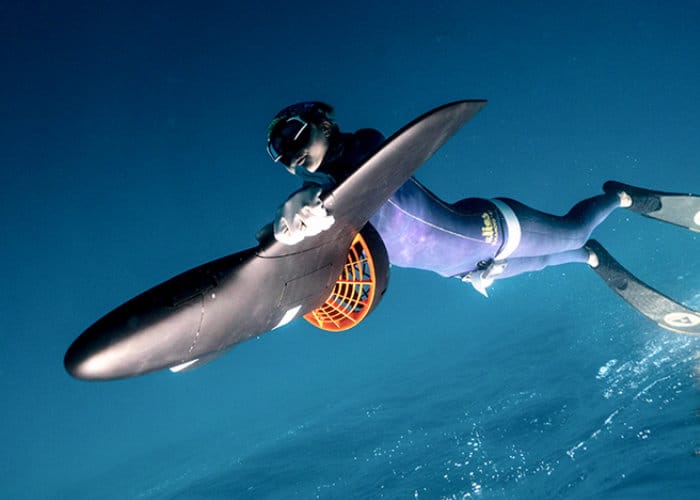 Hoverstar Flight Technology based in Irvine California has created a new aerodynamic sea scooter to provide a personal underwater vehicle that can propel you along at up to 9km/h. The AquaJet H2 can be used to a depth of 60 feet and is equipped with an internal rechargeable battery that can provide up to 100 minutes of useful power. Check out the demonstration video below to learn more about the wing design of the AquaJet H2 which has this week taken to Kickstarter to raise the required funds it needs to make the jump into production.

With still 29 days remaining on its campaign AquaJet H2 has already successfully raised double its required pledge goal and is now available to back with early bird pledges available from $699. If manufacturing goes smoothly, backers can expect to receive their AquaJet H2 underwater sea scooter during July 2018. “With flying in mind and water at hand, the AquaJet H2 gives its users the independence in the water you desire with balance, stability and operability. “

AquaJet Has been designed to combine “modern technology with intelligent design” to create a diving experience unheard of before in the world of DPV’s. The AquaJet features revolutionary wings inspired by the wings found on the most aerodynamic planes to allow the AquaJet to fly through the water with ease with three variable speeds to choose from together with advanced safety controls should anything untoward happen under the waves.

For more information, full specifications and a list of all available pledges jump over to the official AquaJet H2 Kickstarter campaign page by following the link below