When Apple announced their new iPhone 8, iPhone 8 Plus and iPhone X, the company also introduced their next generation mobile processor, the A11 Bionic. The new Apple A11 Bionic processor has recently been benchmarked and it shows some impressive performance games over the A10 processor.

The iPhone 8, iPhone 8 Plus and iPhone X have all been benchmarked by Geekbench and all three devices show significant performance gains in both the single and multi-core tests.

Next up is the multi-core benchmarks, showing the three new iPhones with the new A11 Bionic processor as well as a number of A10X and A10 Apple devices.

The iPhone 8 is around 25% faster on the single core benchmarks and some 80% faster on the multi-core tests over last years iPhone 7. This is an impressive improvement over the iPhone 7 and 7 Plus smartphones.

Apple’s new iPhones also perform well in the benchmarks against other devices like the Samsung Galaxy S8, Huawei P10 and Xiaomi Mi 6, have a look at the chart below which shows both the single and multi core scores. 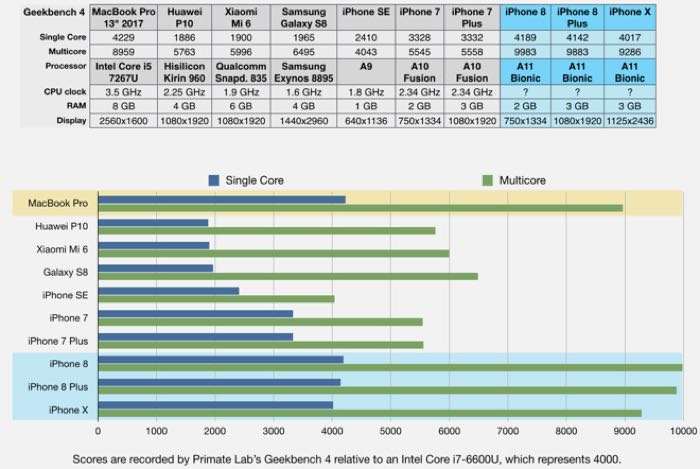