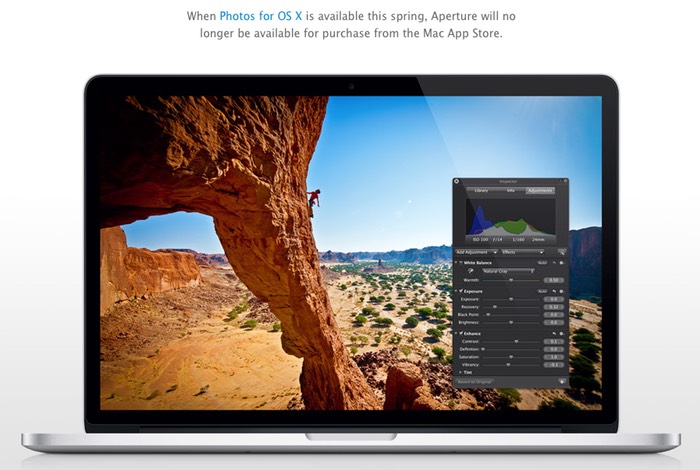 As you can see from the image above Apple is warning users of their Aperture software or anyone that might be considering purchasing the software in the coming months.

That Apple will be removing Aperture from the Mac App Store when their new app Apple Photos launches later this year during the spring months.

If you have already purchase Aperture the photographic software will still be available for you to download via the “Purchases” tab within the Mac App Store, but will no longer be available to purchase by new users via the app store.

Earlier this month Apple released a beta version of its Apple Photos app to developers confirming that it will be equipped with Apple iCloud integration, enabling users to backup all their photos within the Apple cloud storage service.

The new Apple Photos software is expected to provide features somewhere between the more professional Aperture application and the easy-to-use iPhoto app. Both of which will now be replaced by the new Apple Photos app that will be released by Apple alongside the OS X 10.10.3 update when it is released to the public in the coming months.

Apple is also planning to carry out a public beta of Photos before it is officially launched, but no details on a start date has been announced as yet. No indication of pricing has either been unveiled by Apple at the current time for Photos but as soon as more details become available we will keep you updated as always.