Master slingshot maker Joerg Sprave and creator of the Slingshot Channel over on YouTube has been busy creating a new style of crossbow, which has been designed based on the Girion’s tower mounted Anti Smaug Double Crossbow Ballista from the Hobbit which was used to try and take down Smaug the dragon.

The video created after the break is the first of a double part presentation to celebrate the Five year anniversary of the Slingshot Channel. Watch the video after the jump to learn more about the “The Perforation Of Smaug” project and see it in action. 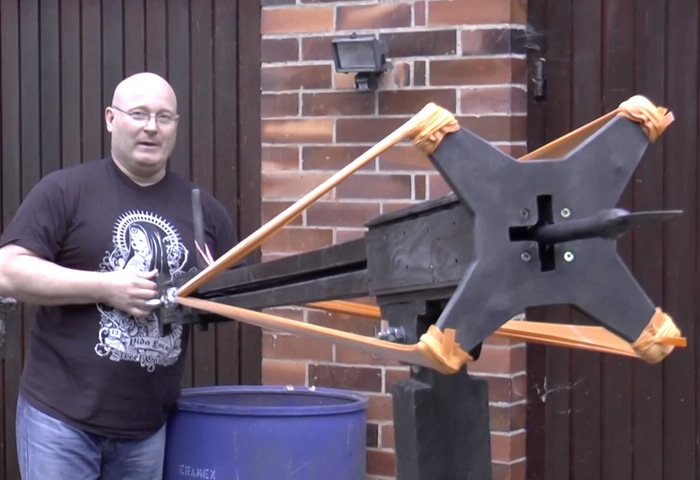 “The giant double crossbow ballista is shown very briefly in the extended versions of the two first episodes of “The Hobbit” that are out by now – in fact, only a few frames can be seen. It is expected that the third movie will have a lot of additional coverage though.

From the few scenes, it already comes clear that the weapon is windlass operated, fires huge black arrows, and can be freely aimed in all directions. Further, it can be handled by just one man.

This first video introduces the weapon and one of the test arrows, plus the test “dragon scales”, a half inch furniture grade plywood board armored with stainless steel. The second part will contain all of tests and will be filmed in the presence of a camera team that will film for a North American TV channel. That part will be published on Jan. 22nd, 2014. “