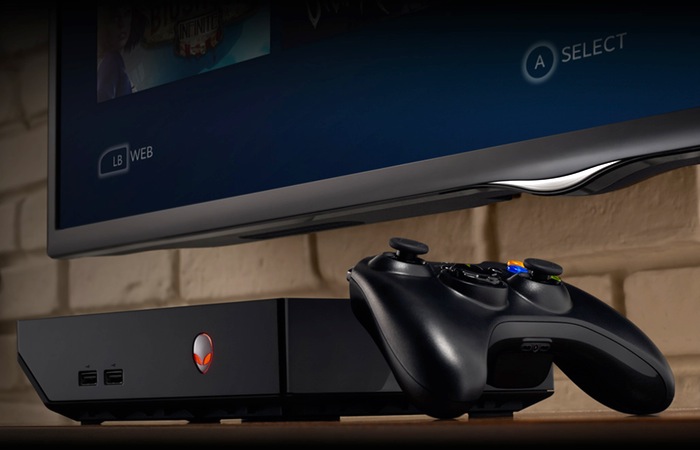 Alienware has announced that their new Alienware Alpha mini desktop games systems which have been specifically designed around Valve’s Steam Big-Picture mode, is now available to pre-order from $549 running the Windows 8.1 operating system.

Dell have designed their new Alienware Alpha system to provide a Windows or Steam OS system that is not much larger than a console controller and can be used without the need for a mouse or keyboard if desired via the custom design user interface and a controller.

The Alienware Alpha console ships with an Xbox 360 controller included, and through a custom software interface exclusive to Alienware. The games machine range is powered by Intel Haswell processors supported by NVIDIA graphics. Alienware explains a little more :

“Alienware Alpha, powered by Steam Big-Picture, gives gamers quick and easy access to the 3000+ games on Steam, and over 500 games that are controller-supported with more coming every day. If you already have a Steam account, all your existing games can be played on the Alpha. Alpha will ship as Steam OS and Steam gamepad “READY” and users will be able to load the OS easily themselves if they wish.”

The Alienware Alpha systems start from $549 and rise to $899 depending on the specifications and hardware you choose for your gaming needs. The top level system is equipped with a 4th Generation Intel Core i7 Processor supported by 8GB of RAM and includes a 2TB hard drive. With shipping commencing on November 24th, 2014 across the range.