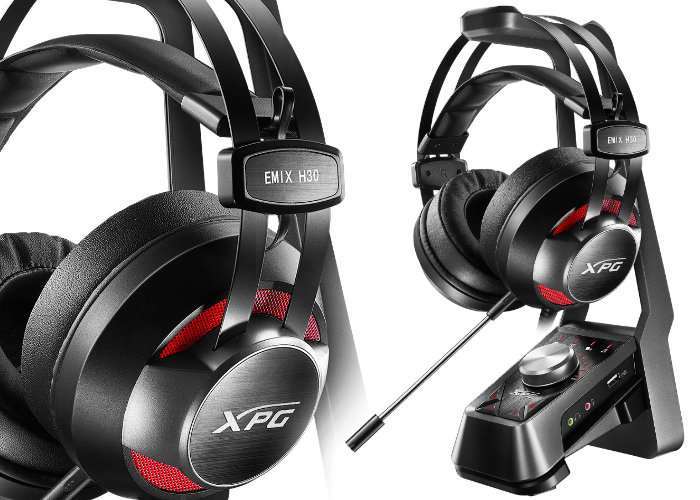 ADATA has announced the launch of two new headsets to its range in the form of the EMIX H30 and EMIX I30 which support PC, Mac, PS4, Xbox, Switch, and mobile devices without the need for drivers to be installed, allowing you to use one headset across a wide range of different devices.

In addition to the new gaming headsets ADATA has also announced the launch of its new SOLOX F30 amplifier which provides a virtual 7.1 surround sound together with distinct audio modes.

SOLOX F30 features and specifications include :

Precision sound processing enables SOLOX F30 to act as an external audio card and amplifier for PC and Mac. Virtual 7.1-channel surround adds depth to sound and more accurate positioning within games for a competitive edge. SOLOX F30 has four sound presets: game, movie, music, and voice. Multiple connections increase its versatility, and it can output audio to headsets and speakers simultaneously or separately.Customers can purchase the SOLOX F30 in a bundle with EMIX H30 and a headset stand, or separately.

Features of the new ADATA EMIX H30 and EMIX I30 gaming headsets include:

– EMIX H30 – big sound and genuine comfort – The full-size EMIX H30 headsets deliver a wide sonic range with powerful bass thanks to their 53mm drivers. They do so while ensuring complete comfort even during extended gaming sessions thanks to breathable memory foam ear cushions, a self-adjusting headband, and carefully optimized clamping force. The detachable microphone ensures gamers are clearly heard by team members, just as the braided cable and gold-plated connector withstand extended and demanding use without sound quality degradation.

– EMIX I30 – strong gaming audio goes in-ear – As most personal audio products for gamers are larger headset designs, compact and mobile in-ear options are rare. EMIX I30 earphones have powerful 13.5mm drivers and a design that fits snugly in ear canals to leave unwanted noise out and enjoyable sound in. Thanks to their oversized drivers, EMIX I30 earphones are able to produce patented 5.2-channel surround sound with a strong spatial effect. While compact and light, EMIX I30 earphones bring gamers impactful sound whether at home or on the go.