Loves it so much in fact, she finishes a few games every other day. Her name’s Umeji Narisawa, a 99 year old grandmother who took up Famicon (better known elsewhere as NES) a quarter century ago and has been at it ever since. Gotta hand it to the old folks, they don’t outgrow their diversions as much as the younger set do. 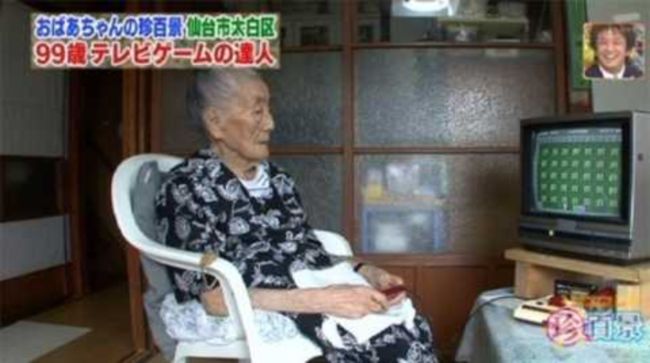 Seen above is a picture of her in acton plugging away with her trusty old console. You have to love old cartridges, the magic in them gets better as time goes by.

Unlike a few of the elderly we know, Mrs. Narisawa isn’t no slouch at the controls either. She’s finished Bomberman countless times and actually credits it for keeping her brain sharp. Ah, challenges—without them where will the zest of life come from.

While it’s clear dear lady Narasawa hasn’t taken up World of Warcraft or first-person shooters, we believe if fate continues to smile on her she might try out contemporary games. Keep in mind she’s 99 years old and reaching such an age is a serious feat. According to our calculations she was born in 1912 and lived through several major upheavals that have shaped Japanese history, including the Second World War.

Actually if we met her we’d love to ask if she has a favorite manga.

Here’s a video of her in vivid action: