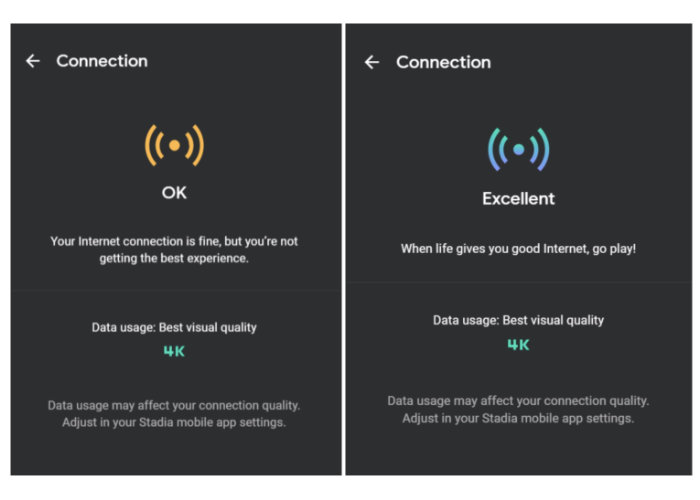 It seems that Google has now started rolling out 4K game streaming support via its new Google Stadia game streaming service. Several gamers have reported encountering 4K Stadia on the web around the world, indicating that an official announcement is imminent by Google and could be made this week.

4K gaming for Stadia on the web will provide gamers with obvious visual improvements if their Internet connection is capable of providing the required bandwidth for a stable connection. To check if you’re already enjoying 4K game streaming simply open the in-game menu — Shift + Tab or the Stadia button on the Controller and click “Connection.” Here under the “Data usage” status, a mint green “4K” icon will appear, as in the images above.

The Google 9to5 website explains that “An “Excellent” connection is technically required, but we’ve also hit 4K on “Good” and even “Ok.” Along with internet speeds over 35Mbps, the $9.99 per month Stadia Pro subscription is needed to access the “Best visual quality” option.”

For more information on the Google Stadia game streaming service launched by Google towards the end of last year jump over to the official site.