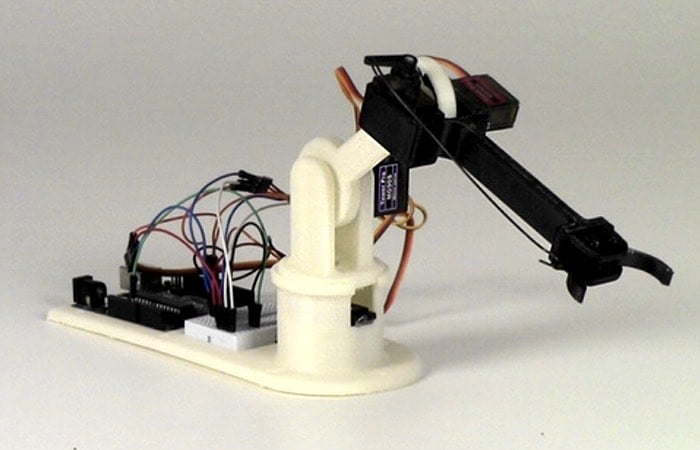 The LittleArm robotic arm can be constructed using a little Arduino hardware together with a few 3D printed parts,. The robotic arm has been created by Slant Robotics as a kit which you can now back via Kickstarter with pledges starting from just $35.

The LittleArm was a weekend project that has grown into a full-time project and business. This campaign is to get the ball rolling. I wanted a robot arm. But even the kits are expensive, for what they deliver. So one weekend I grabbed a few high strength microservos and went to work designing the parts to have printed. At the end of the weekend I had a couple of different versions of the robot. I took it to work and everyone loved to play with it and I soon had a couple of people ask me to print them one.

Later, I was doing some demonstrations for STEM teachers. They also loved the idea, and they asked me to make them some for their classes. So I decided to turn my little maker project into an actual product at Slant Robotics. This campaign is to raise funds for building software and tutorials on using the arm and to purchase several 3-D printers and other supplies in order to produce the arms in greater quantities.

The LittleArm is a completely open source project. I made it 3-D printed so that anyone can download the parts and start using it. It also ensures that the arm can be rapidly changed and developed for different applications, without being constrained by molds.

For more information and to make a pledge to help LittleArm go into production jump over to the Kickstarter crowdfunding website by the link below. If you enjoyed this article you are sure to enjoy how to build your very own Arduino wind speed meter or anemometer project which is easy to build with basic Arduino skills.
Source: Kickstarter