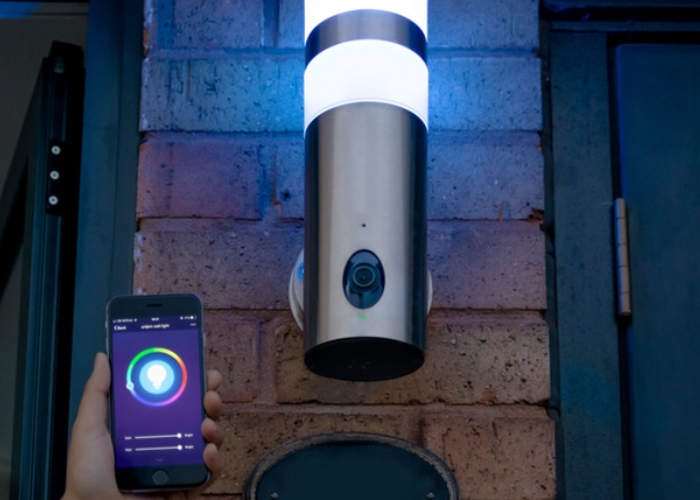 Unijem based in London has created a new outdoor security camera which has been combined and enclosed in a handy wall light providing the best of both worlds in one device. The security light and camera provides HD footage and offers a four in one security system which connects directly to your smartphone device. Watch the demonstration video below to learn more about the security camera that allows you to see, hear and speak to anyone who comes near.

Launched via Kickstarter this week the team at Unijem are hoping to raise £30,000 over the next 27 days to make the jump into production. Fitted with a 180 degree panoramic lens the camera is also equipped with infrared night vision, voice intercom, motion detection and a hundred decibel siren to alert you and others of intruders. Unijem explains more about the inspiration behind the new home security camera which is now available to back from £99 with delivery expected to take place during April 2018 offering a 45 percent discount off the recommended retail price of £180.

Get notifications as soon as someone approaches your driveway or door, and be able to have a two-way conversation with visitors. Any movement near your house, soon as Unijem notices movement it starts recording even at night with an infra-red vision.  You’ll also be able to take videos and pictures, which can be stored directly to your phone, and most importantly alert the relevant authorities.  Access the device from anywhere around the world via our app. No more asking friends and family to drive to and from your home each day. Multiple colour (16 million) selections and at random intervals, to make it look like you are at home. Someone at your door? Have a look via the app and see what they have to offer before you open the door. Say goodbye to prank callers and door to door salesmans.

Jump over to the official Kickstarter campaign by following the link below for a full list of all available pledges, specifications and details.