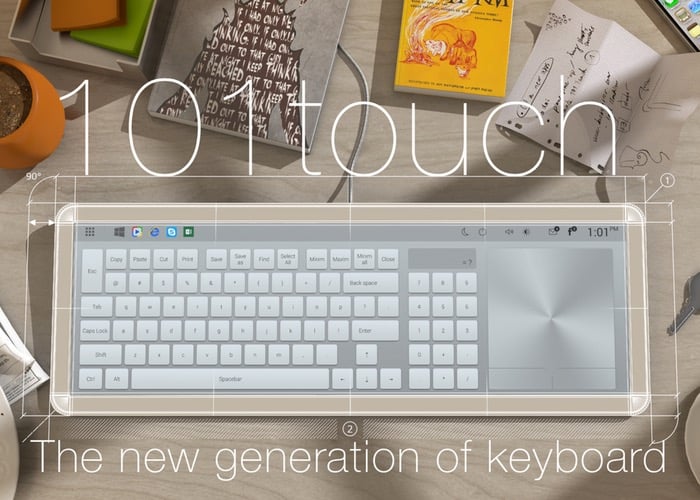 Computer users that are looking for a new and innovative way to interact with their systems might be interested in the 101 Touch keyboard which has launched over on the Kickstarter crowdfunding website with the aim of raising £180,000 to help take the concept into production.

The 101 Touch Keyboard has been designed to offer a next-generation keyboard to users providing a new perspective to computer controls its creators 101touch. Watch the video below to learn more about the 101touch project and see it in action.

“101touch is a young company that managed to bring together the experts seeing the world differently and who are satisfied only with the best without any significant compromises.

And how has our idea emerged? Three years ago we were irritated by inflexibility of traditional keyboard and by an endless number of keyboard shortcuts for each new program or a game.  Why cannot the keyboard function be more user-friendly?

The first and crucial problem for us was that our new keyboard should work on any device, including MS-DOS, Windows, Linux, OS X and BIOS. Without any installation and setup. We have succeeded and the final solution was given the name ‘the emulator’. We finished the prototype after one and half year’s work.

The prototype consists of two displays and two controllers, because there was no display of the specific size produced. We are currently dealing with three producers about a possible production; this technology is known and used in tablets. The manufacturers require exact specifications from our side, but we will be able to give them these data once we have launched our product at Kickstarter.”

For more information on the new 101touch keyboard project jump over to the Kickstarter website for details and the ability to make a pledge starting from £99 via the link below.