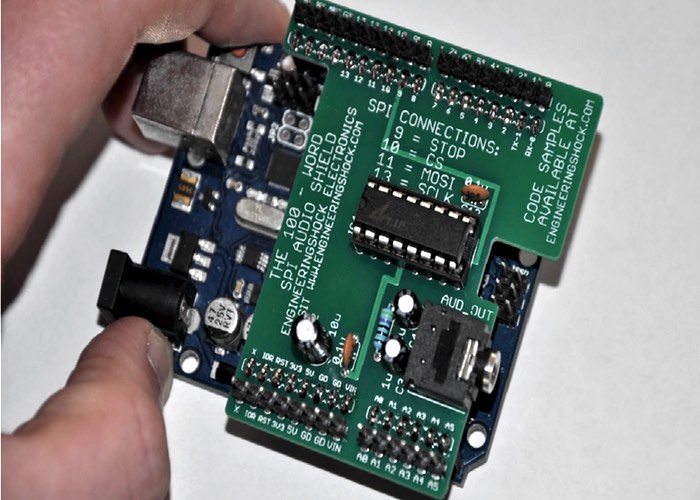 Serial Kickstarter, Patrick Thomas Mitchell has once again launched a new piece of hardware via the crowd funding website and has this time created a useful Arduino Audio Shield that is capable of storing over 100 words.

Simply connect the Arduino Audio Shield to your Arduino Uno or similar micro controller development board and you have the power to make your projects talk and even create sentences or express comments with very little programming.

Watch the video below to learn more about this useful little add-on for your Arduino projects. The project is the developers 16th Kickstarter campaign. Mitchell explains more :

Meet the (production-ready) “100+ Word” Arduino Audio Shield! With the help of an Arduino Uno and an audio player (Bose player/ stereo player / computer speakers / etc), you can create sentences or single word commands, so that your Arduino circuit offers verbal feedback! The voice used is a charming British female, which I like to call “Lucy”. It is incredibly easy to use, and communicates with your Arduino via the SPI serial interface. Never used the SPI interface before? It is super easy, and I’ll be providing code samples, so that you’re off to the races as soon as your reward arrives!

There are currently 138x words programmed into this shield. There is roughly 20% of memory space left at this point in time, which means that I can program roughly 27x more words into memory. If you pledge towards this campaign, and you wish to see certain words programmed into memory, simply leave a comment, or message me offline! I made a simple piece of code that runs through all of the programmed audio commands sequentially, so that you can hear them all in the below video! This library is going to be great! The main categories of words that are currently programmed into this shield are numbers, units of measurement, colours, general words, commands, security themed words, greetings, and feelings.

Visit the Kickstarter website to see a demonstration of the Arduino Audio Shield inaction with 138 words programmed into the shield, and to also make a pledge for the new Arduino shield with pledges starting from just $21. If you liked this you might also be interested in building an Arduino wind speed meter