We have heard a lot about the new ZTE Nubia X6 over the last few weeks, and now ZTE has sent on press invites to the launch event for the handset.

The launch of the ZTE Nubia X6 will take place on the 25th of March in Beijing, the handset will come with a 5.5 inch QHD display. 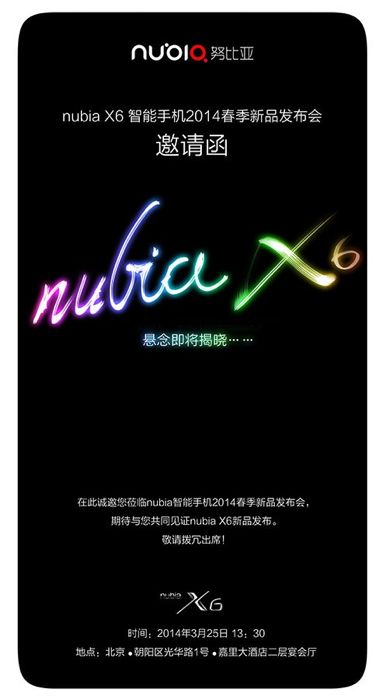 The QHD display on the ZTE Nubia X6 will feature a resolution of 2560 x 1440 pixels, the handset will be powered by a qaud core Qualcomm Snapdragon 801 processor clocked at 2.5GHz.

Other specifications on the ZTE Nubia X6 will include either 2GB or 3GB of RAM, the device will also feature front and rear facing cameras.

The handset is also expected to come with a fast charge feature, and a battery that is designed to give you a longer usage time.

As soon as we get some more information on the new ZTE Nubia X6, including some more photos of the handset, and also some pricing information, we will let you guys know.