Next week ZTE will take the wraps of their new flagship Android device, the ZTE Nubia X6, which the company has been teasing over the last few weeks.

ZTE are holding a press conference on the 25th of March, where they will unveil the new ZTE Nubia X6, and now the device has been certified in China. 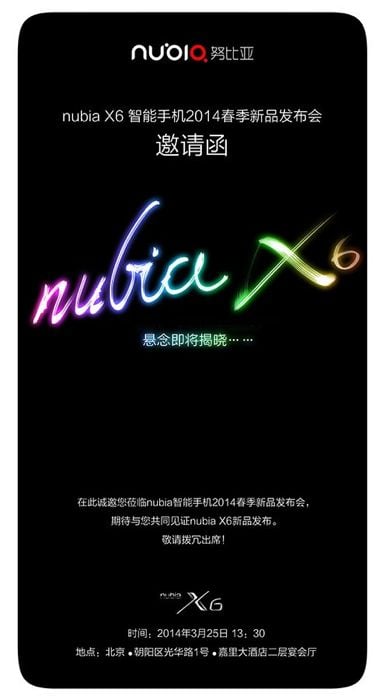 The ZTE Nubia X6 recently appeared in China’s TENAA, which is the equivalent of the FCC, and the specifications revealed are different to the rumored ones we heard previously.

According to the information that was released, the ZTE Nubia X6 will come with a 6.44 inch full HD display with a resolution of 1920 x 1080 pixels.

The device will apparently be powered by a quad core 1.7 GHz processor and will come with 2GB of RAM and Android 4.3 Jelly Bean.

The handset is said to feature a 5 megapixel front facing camera and an 8 megapixel rear camera, we will have more information on the device next week, along with confirmation of the handsets specifications.