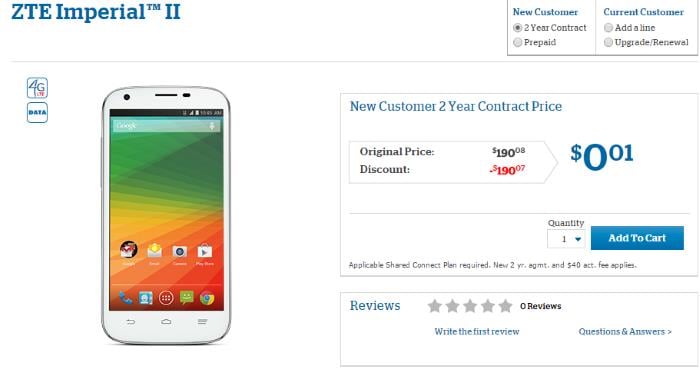 Budget-friendly smartphones are gaining popularity lately as many OEMs are now offering devices with decent specifications at an extremely affordable price tag.

Recently, U.S. Cellular started selling the ZTE Imperial II, a handset which comes with an affordable price tag, and is not too mediocre in terms of specifications.

“The Imperial II is a result of listening to what customers want and applying our expertise to produce an affordable premium device. Not only does the phone have one of the biggest and brightest screens in its price class, it also has a better user experience with features such as LTE and a quad-core processor you won’t find in similar devices,” said Lixin Cheng, chairman and CEO of ZTE USA.

The ZTE Imperial II gets a bump in the screen size, offering a 5-inch qHD display compared to a 4-inch one in its predecessor. Users also get to enjoy the sweet taste of Android 4.4 KitKat as its the operating system, alongside a 1.2GHz quad-core Snapdragon processor, 1GB of RAM, 4G LTE connectivity, a 5MP camera for photos and videos, and a 2,300 mAh battery to make sure there’s enough juice for the handset.

The handset costs only $149.99 off-contract so it’s not too heavy on your pocket as well.