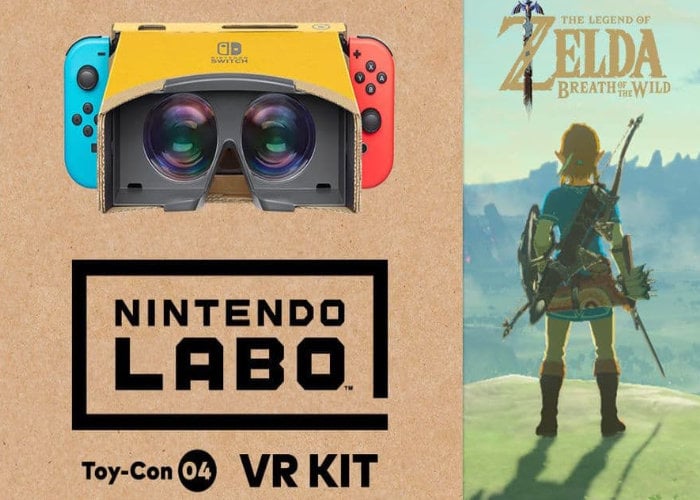 Thanks to the launch of the new Nintendo Switch Labo VR Kit, Nintendo has announced that later this month they will be rolling out virtual reality support for the awesome Legend of Zelda Breath of the Wild Switch game. Enabling players to enjoy the kingdom of Hyrule in virtual reality from April 25rth 2019 onwards.

Announced via the official Nintendo of America Twitter account, this does not seem to be an Aprils Fool like, although very few details are available on just how the virtual reality support and the combined Labo VR Kit will function together. In the meantime check out the quick teaser video below which will also support Super Mario Odyssey, which is getting its own, smaller VR mode.

“With a free software update for The Legend of Zelda: Breath of the Wild game and the Toy-Con VR Goggles from the Nintendo Labo: VR Kit, enjoy this epic adventure like never before. Turning the feature on and off is a snap. The vast kingdom of Hyrule awaits!”

Nintendo explained a little more about the new Labo VR Kit. “Introducing the most immersive, robust Nintendo Labo kit to date—this one combines DIY fun, pass-and-play multiplayer, and family-friendly play with simple, shareable VR gaming. It even includes a programming tool you can use to create your very own VR games and experiences! Feel your creations come to life as you and your family blast through an alien invasion, create 3D works of art, dive into an oceanic photo safari, soar atop a bird, and go wherever else your imagination takes you.”

To learn more about the new Nintendo Switch Labo VR Kit which will be officially launching on April 12th, 2019 jump over to the Nintendo Labo website.