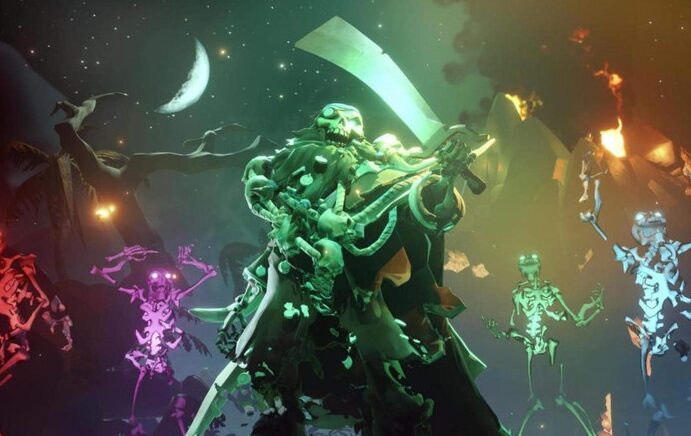 Microsoft has listed all the Xbox game events that we be taking place this Halloween, detailing all the Special Xbox Halloween events in your favorite Xbox games such as Minecraft, Sea of Thieves, Fortnite and more. “With the big day close at hand, a bunch of games have revealed their plans to celebrate the spookiest of holidays with special events. There’s a lot of great stuff happening this year, so let’s take a look at some of the standouts.”

Sea of Thieves – Fury of the Damned

Perhaps not surprisingly for a game that’s full of spooky skeletons and ghost ships, the team at Rare always goes big for Halloween. In this year’s in-game event, players can earn extra Favour with the Bilge Rats by accomplishing tasks (laid out in-game via Mysterious Notes) such as taking down Skeleton Ships or emptying out Skeleton Forts. As reach certain Favour thresholds, Wicked Web cosmetic items will be awarded to you for your efforts. There are even Community Spirit Challenges to annihilate a huge number of skeletons, offering pirates even more rewards after Fury of the Damned ends. For more details, visit the official Sea of Thieves site.

Once again, Fortnite’s Halloween event is titled Fortnitemares and it will feature some spooky decorations sprinkled around the island where the game’s battles take place. There are also some new skins available for players, including The Walking Dead’s Rick Grimes and everyone’s favorite lab-created monster, Frankenstein.

In addition to special Halloween costumes for characters like Bloodhound and the already-spooky Revenant, Apex Legends will also feature a returning game type called Shadow Royale. In this mode, dead players will return as ghosts that can help their teammates from the great beyond.

Developer Psyonix always goes big with their Halloween offerings, and this year is no different. Rather than skewing spooky, however, this year’s Haunted Hallows event will focus on everyone’s favorite caped crusader: Batman. The big draw is the ability to unlock both the 1989 and 2016 versions of the Batmobile, though there’s also the new Gotham City Rumble mode, which places the Rumble game type squarely in Batman’s world.

Everyone who plays Rainbow Six Siege loves the annual Doktor’s Curse event, so it’s not surprising to see Ubisoft bring it back for another year. Offering a spooky twist on the tried-and-true Rainbow Six Siege formula, this mode finds players battling their way through the titular Doktor’s castle, with mutated operators battling their way through twisted creatures bent on destroying them. As the mode’s tagline says, “When the Doktor’s away, the monsters will play.”

A seasonal series stalwart since 2016, Overwatch’s annual Halloween Terror event brings back Junkenstein’s Revenge with new Challenge Missions for players to overcome. For those fans that are just in it for the loot, there are also plenty of weekly challenges that will offer icons, sprays, icons, and even some Epic Skins. You can even nab some loot boxes that contain cosmetics and gear from previous Halloween Terror events.

Destiny 2 – Festival of the Lost

Festival of the Lost returns! Once again, you’ll be donning a mask and collecting candy throughout the universe, then diving into haunted versions of the game’s lost sectors to take down headless enemies. Much like the Headless Horseman, they’ll be sporting jack o’ lanterns on their shoulders, so go for those headshots!

Call of Duty: Warzone – The Haunting

If you’re looking for a game mode that switches up everything you’ve come to expect from a game, look no further than Warzone’s second annual Halloween event. The Haunting is a fun twist on Warzone’s Infection game mode in which players turn into ghosts after they die, gaining special powers that they can unleash on their unsuspecting (and still-alive) fellow players. There’s even a fear meter that will give you a good fright once filled!

Giant worms: so hot right now! While No Man Sky’s actually added massive, centipede-like Titan Worms to the game in an update this year, the Emergence event gives players the ability to tame them, ride them, and, yes, even raise your own from a wee baby worm. What’s more, you can nab a special worm mask that’s just as creepy as it sounds.