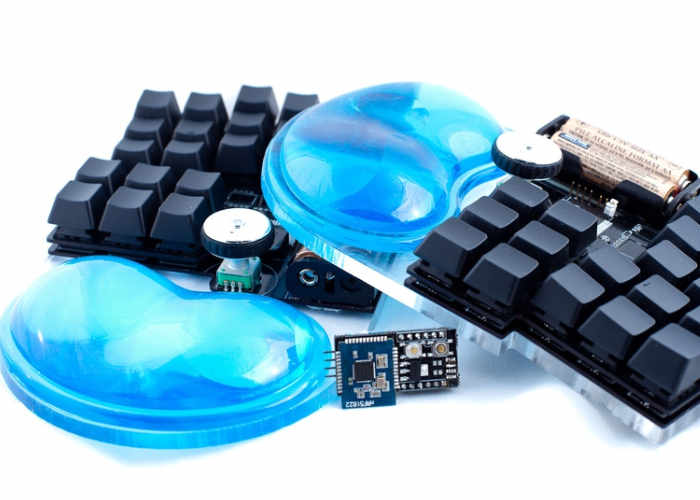 Engineer Joshua Broekhuijsen has designed and created a prototype of a very unique wireless keyboard and mouse setup which he has launched via Kickstarter this week to raise the required $20,000 needed to take the idea into production. Pledges are available from $125 for the Demi-Kit with shipping expected to take place during June 2018, if all goes well. To learn more about this unique wireless keyboard and integrated mouse watch the demonstration video embedded below.

Joshua explains more about the inspiration behind the keyboard and its current development status.

I’ve had this idea for a while, but I was finally inspired to make it happen when I saw a similar project, titled “Mitosis,” on reddit (I already mentioned the electronic overlords, so I can safely tell you that I have spent more hours on that website than I care to count). If you’re interested, I’d recommend taking a look – it’s a fantastic read.  I set out to adapt his design to my own tastes and incorporate an optical sensor to make the whole thing ridiculously OP. Along the way I’ve been able to use and expand my skills, and get a bunch of wonderful input from an almost-cult of keyboard enthusiasts.  None of this would be possible without the help of the good folks developing the powerful, open-source keyboard firmware this runs: QMK.

At it’s heart, it’s pretty simple.  OK, that was a lie.  But it’s awesome.  1000 times every second, a microcontroller/wireless transceiver module on each keyboard half checks the switch status to see what the keys and scroll wheel are doing, as well as what the optical sensor reports.  It checks everything over – running a button debouncing routine to make sure the switches are actually where they say they are – and sends a wireless packet to the receiver.  The receiver combines packets from the left and right modules and passes that to a USB controller running QMK, which compares keystate information with it’s internal keyboard map, and finally it sends that data to the computer as keystrokes, scrolls, mouse movements, and clicks.

Oh.  That.  Right.  Here’s the short version: my hardware already exists – and works.  There’s not some obscene amount of debugging or improvement that needs to go on.  Once this Kickstarter is funded, there are very few things on the checklist of “things that need to happen before this is in your hands.”  The summary? Build final prototype, buy parts, assemble things, ship things.

More information on the unique wireless keyboard and mouse designed by Joshua Broekhuijsen Jump over to the official Kickstarter campaign page via the link below.