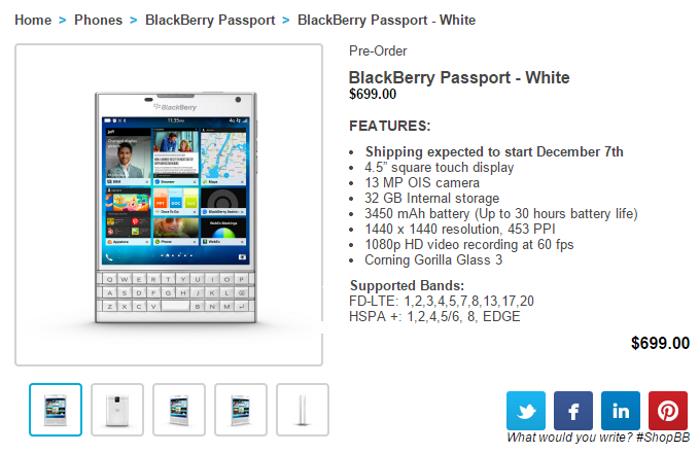 It’s been a while since Blackberry launched its odd-looking Blackberry Passport. If you fancy the handset in white, you may get your wish soon as the handset is currently listed on Blackberry’s website for $699 — $100 more than the black version of the handset.

The handset is also expected to launch in the UK on December 8th, and Clove, a popular online retailer in the UK, is taking pre-orders for the handset for £485 — a similar price tag as the black version.

As a quick recap, Blackberry Passport features a 4.5-inch display sporting a resolution of 1,440 by 1,440 pixels with a 453 ppi pixel density and Corning Gorilla Glass 3 protection. The handset features a quad-core Snapdragon 801 SoC, 3GB of RAM, and 32GB of internal storage paired with a microSD card slot which supports up to 128GB.

Blackberry Passport also features a 13MP camera with optical image stabilization for photos and videos, as well as a 2MP front-facing camera. Other features include NFC, 4G connectivity, WiFi, a 3,450 mAh battery and runs Blackberry 10.3 OS pre-installed out of the box.

Anyone planning to pick up the Blackberry Passport? Sound off in the comments below.