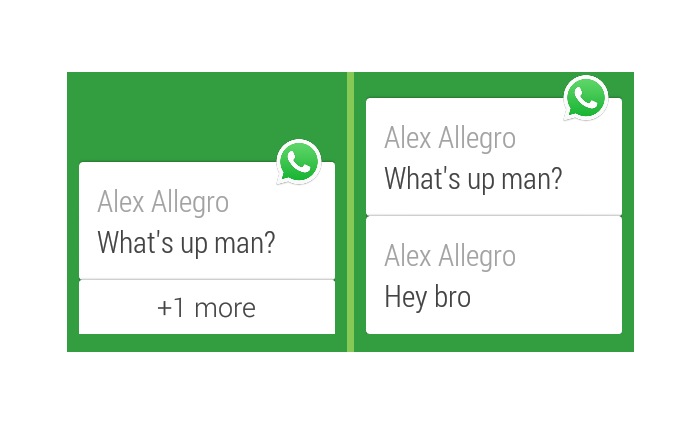 WhatsApp the popular messaging service has this week released a new beta version of their WhatsApp application for Android, which brings with it support for the new Google Android Wear operating system.

Android Wear is a version of Google’s Android operating system that has been specifically tailored to be used on wearable device and was first unveiled by Google on March 18, 2014, together with a developer preview.

WhatsApp enjoys more than 500,000,000 regular users of their messaging service and the new Android Wear support will allow the app to make the jump from smartphones to users wrists.

Features supported by the new WhatApps Android Wear supported beta update, include the obvious clearing and viewing of notifications, as well as the ability to reply to messages with voice, stacked notifications and a handy complete preview of received messages.

WhatsApp Android Wear Stacked notifications enables you to quickly scroll through multiple message with ease, and then dictate replies when necessary by talking to your wearable Android device.

The latest version of the WhatsApp Messenger has not yet been uploaded to the Google Play store but is available to download directly from the WhatsApp website here. It does require that your device be running Android OS 2.1 or above and WhatsApp recommends user have an unlimited Internet data plan. At the current time Android tablets are not supported by the application.