No country on Earth has a citizenry so passionate for robots as Japan. Explaining why the Japanese public has such a strong fixation on mecha might be pinned cultural beliefs, though we prefer a more straightforward line of reasoning: kids raised on Gundam must surely have a soft spot for humanoid machines. 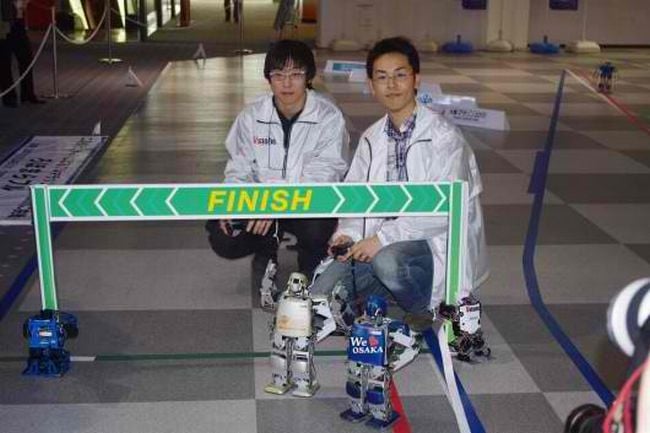 Especially the kids in Vstone team who must behugging each other numb and crying after their robot aced the RoboMara. Robo what? RoboMara. As in “Robot Marathon” held in Osaka Japan this week. In it, a bunch of home made robots of very impressive quality did a staggering 422 laps around a 100-meter track. Many fell by the wayside and by the final turn only two contenders remained.

Long story short, team Vstone won by a few inches but ever the gentlemen, they gamely posed with the second placers before the cameras. (It’s pictured up north.)

The RoboMara is a departure form the usual robot competitions in Japan. Where wrestling and battling ‘bots are the norm, the Robomara pitted engineering smarts and creative design to produce the optimum performing champ. Three cheers for the Vstone boys!