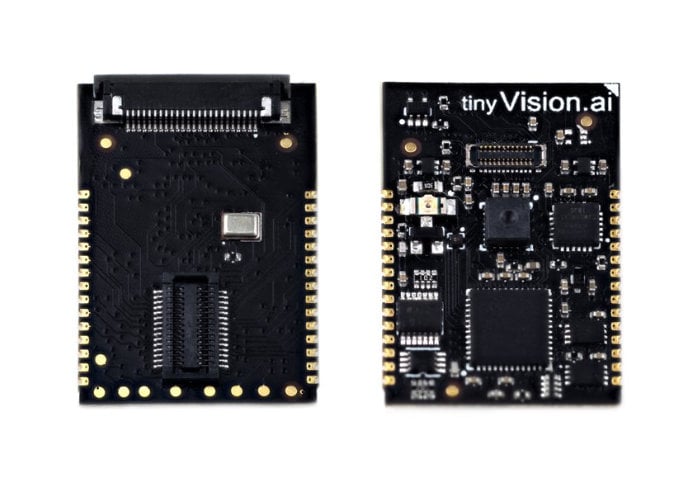 Soon launching via the Crowd Supply website is the Vision FPGA SoM development board, offering an FPGA-based SoM with integrated vision, audio, and motion-sensing capability. The Vision FPGA SoM measures just 3 cm x 2 cm and is an iCE40 5K FPGA based System on Module that integrates a low power qVGA vision sensor, 3 axis accelerometer/Gyroscope and an I2S MEMS microphone in a small form factor. The board has been developed with the following in mind say it’s creators.

– Low Power Image Sensor + FPGA: Overall power consumption will be minimized and in the 10-20mW range to enable battery powered applications.
– Well-designed Host Interface: Easy to integrate into a larger system using an interrupt driven SPI host interface, programmable IO voltages to support a glueless HW interface.
– Modular Design: Complexity will be localized to the SoM so that the developer can quickly integrate this device into their system using a breadboard as well as a simple API. All required components for vision/audio/motion (eg. image sensor and illumination) will be integrated so the developer doesn’t have to cobble together parts. The solution will translate into a final product with minimal changes.
– Flexible and Easy to Use: The Vision FPGA SoM is made to be easy to integrate mechanically and electrically. The SoM will appear like an SPI device with a SW library to support it. You will have the ability to configure the FPGA CRAM instead of having to program the Flash followed by a reset to configure the FPGA. Provide flexibility to the developer in choosing an image sensor while providing a reasonable low-cost default option.
– Strong set of features: Will not be just another FPGA board clone. Require a reasonably sized SRAM to allow for temporary data storage at low power (not DRAM!) which is especially important for vision applications where multiple image frames may need to be captured/processed. Audio and IMU are commonly used together with vision and will make sense to integrate on this platform.
– Documented and Open FPGA code: Ideally use an open source toolchain. Well-documented code and plenty of simple examples for each subsystem as well as a large design that ties together various parts of the SoM.

For more details and full specifications as well as the ability to register your interest to be notified when the Vision FPGA SoM is available to purchase jump over to the official Crowd Supply website via the link below. Potential applications for the small form factor Vision FPGA SoM board include :