After dropping the image of T-Mobile Sony Xperia Z1 and Galaxy S4 Mini for Sprint and AT&T, the notorious leakster @evleaks posted another image, and this time, it’s Verizon Samsung Galaxy S4 Mini. But, how do we know? Well, it’s pretty obvious, just by looking at the home button that clearly states “Verizon”. It’s quite similar to the branding technique used by the carrier when it launched Galaxy Note II last year, which was criticized at launch and made Verizon skip this for the Galaxy Note 3 and Galaxy S4. 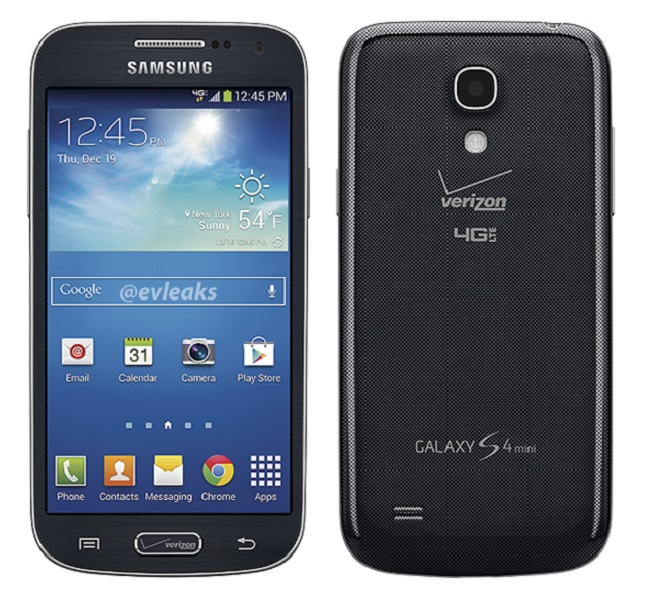 Earlier today, @evleaks posted of what appears to be an unofficial press render of the Verizon Galaxy S4 Mini. It’s been a few months since Samsung unveiled the miniature version of its flagship handset, and it appears as if Samsung is getting ready to push its budget-friendly Galaxy S4 in the US market by launching it on multiple carriers.

Just as a quick recall, the handset rocks a 4-inch qHD AMOLED display boasting a resolution of 540 x 960 pixels and run Android 4.2.2 Jelly Bean out of the box. Samsung Galaxy S4 Mini is powered by a dual-core 1.7GHz processor, 1.5GB RAM, 8GB internal storage with a microSD card slot, 8MP rear camera capable of shooting HD videos and a 1,900 mAh battery to provide enough juice to the handset.

There’s no information about its availability on the Big Red nor its price. We’ll update you as soon as the carrier makes an official announcement.