The man behind the gadget pictured below is no stranger to this website. In fact, Evan Solida was featured here a few weeks ago for his sexy Ra’el bike concept. It turns out Evan’s taste in sleek bikes comes from experience; he was quite the road racing aficionado back in the day. 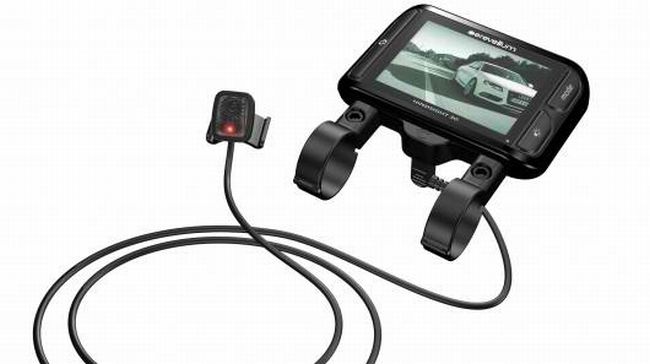 Unfortunately he met a near-fatal accident and though he’s given up on his hobby, Soleda spent more than a couple of years perfecting a rear-view system he devised.

The end product is the Cerevellum Hindsight 30 and 50. The Hindsight 30 is a small LCD screen placed directly in front of the bike rider (the handlebar to e specific), who can check it for a constant rear view stream. This won’t e possible, of course, without the small camera behind the bike seat. Such is the simplicity of the Hindsight 30, which will be unveiled at a Las Vegas interbike trade show. The Hindsight 30 will retail for $249.

Even better is the still-to-e-developed Hindsight 50, which works like a black box and was the subject of this earlier post.

Here’s what Solida has to say on his motivation to build the Cerevellum Hindsight series:

“I’d been working on a digital rearview mirror for bicycles as a portfolio project for years, [but] it was never anything more than something I worked on to improve my design skills. I had a few working ‘prototypes’ hacked from Nintendo Gameboys, but that’s about the extent of it.”