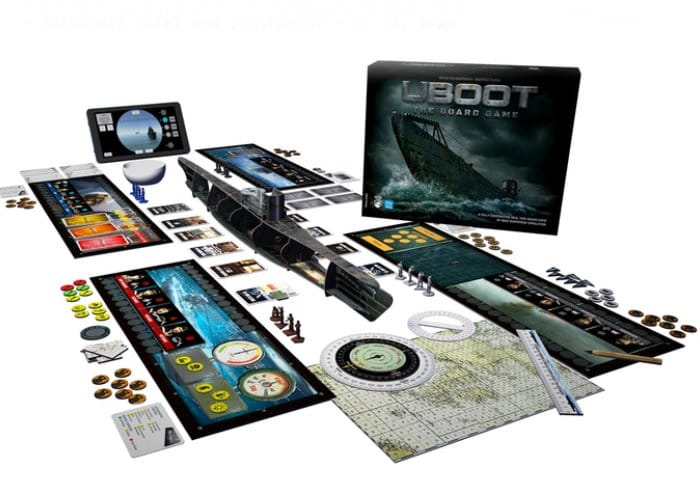 A unique tabletop experience has launched via Kickstarter this month in the form of UBoot, a smartphone or tablet application powered board game which allows you to cooperatively control a WW2 submarine, in the ultimate underwater table top thriller. The UBoot board game has already raised over £330,000 thanks to over 5,100 backers with still 22 days remaining on its campaign. Check out the demonstration video below to learn more about each player a role and how the smartphone companion application controls gameplay and provides a new perspective extending tabletop gaming into the digital world.

UBoot takes the form of a real-time tabletop game of WW2 submarine warfare offering gamers an underwater cooperative war thriller allowing 1 to 4 players to assume the roles of the Captain, the First Officer, the Navigator, and the Chief Engineer on a type VIIC U-boat. Created by the team at Phalanx based in London, the real-time application driven game will put your skills to the ultimate test and includes a full 3D cardboard 1/72 scale WW2 submarine and 16 crew miniature is also in 1/72 scale. The companion application provides an extra level of realism as well as a challenging enemy artificial intelligence which will push your crew to their limits as the action unfolds both on strategic and tactical scales, requiring teamwork and smart thinking to prevail. For more details and a full play through check to the video below.

To make a pledge for £65 and received the official Kickstarter extras and all stretch goals that were reached throughout the campaign jump over to the official Kickstarter campaign page by following the link below. The project required raising a pledge goal of £65,000 which is been easily raised and passed thanks to the huge popularity of the game. All being well worldwide delivery of UBoot should start taking place during December 2018.