We always believed it was tough being a coffee table. Unlike other functional surfaces such as desks or supper tables, both of which have clear cut purposes, coffee tables always had to have a broad role. Too low for a pleasant dinner, too small to hold a lot of stuff. 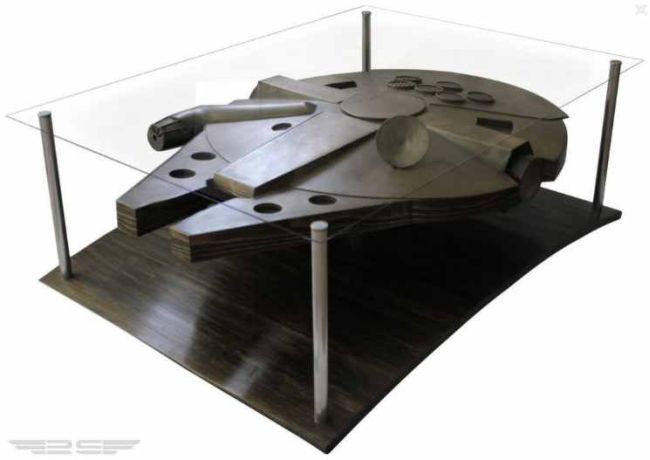 What the humble coffee table does have in spades, of course, is the potential for endless modifications. At the hands of various designers, coffee tables have acquired all sorts of drawers and themes. Such an open-minded approach to the living room fixture elevates the coffee table experience to a fashionable exercise. It’s always nice to have a compelling coffee table sitting between plush (beer and pizza stained) couches.

Seen above is an unofficial Millennium Falcon inspired coffee table that has a model of the Han Solo craft underneath its glass top. Since this isn’t official Star Wars swag, the fastest ship in the galaxy isn’t as detailed, but the basic form is there.

The wood and bronze model isn’t supposed to be used as a toy, so don’t try pulling it out and firing lasers at  hapless guests. Upon sight of it, the people who drop by your place are supposed to go, “Hey, it’s a Millenium Falcon!”

This coffee table wills set you back a pile of money and on the product page it’s priced at $1,500. Holy Cow, Chewbacca!