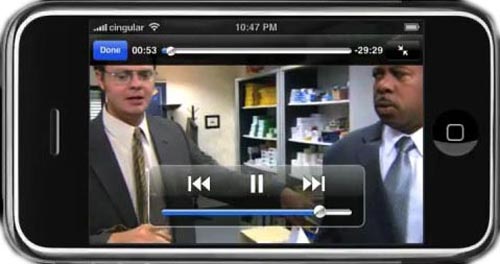 London based technology specialist Best Before had developed server based technology called ‘Millicent’ that will allow broadcasters to provide an edited video feed that can be watched on the iPhone.

iPhone users will be able to view live TV through it’s Safari browser over a Wifi network, and it may possibly work over the Edge network as well.

The company has confirmed it is in talks with major broadcasters who are interested in bringing live TV to the iPhone.

“Even two years ago the idea of broadcasting to phones would have cost millions, so we can test how far the technology has changed,” said Mark Rock, the Best Before chief executive.

“Whatever people think of the iPhone it has fundamentally changed the market because the carriers no longer assume people are happy with a walled garden of services. The time has come for a new approach.”

This sounds like a great idea, I have been using the BBC iPlayer on the iPhone for a while now and have found it very useful, but being able to watch live TV on the iPhone would be even better.