Dubbed the HRNVS (or high resolution night vision system), this latest from defence contractor SA Photonics is supposed to give US airmen the edge in night time operations. Even if the night vision capabilites of the US military is the best in the world, SA Photonics thniks the current system employe dby pilots on helicopters and aircraft is too cumbersome. So they built this ugly thing. Actually it works via two flip on viewers and the lenses ar eon the head for a wider view. Sensible indeed, but it’s really really ugly to look at. Why can’t they just build a mask similar to what the Predator uses? 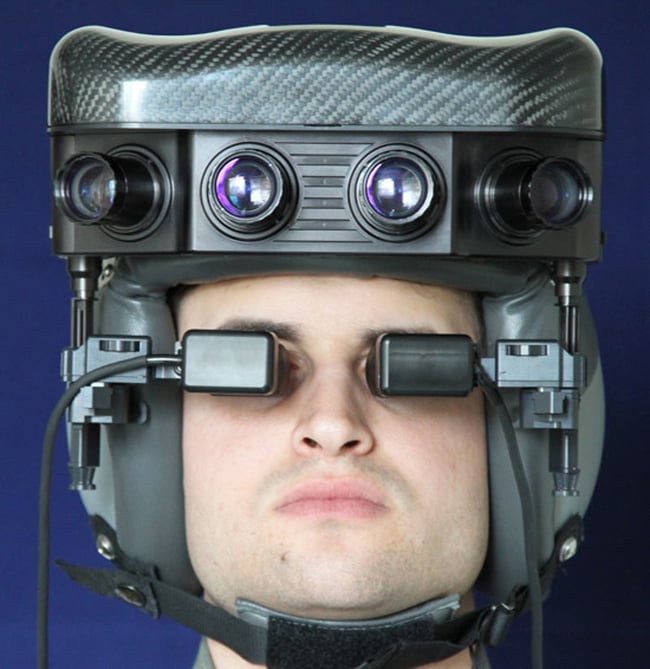 So there’s an upcoming conference where this new headset will be showcased and presented. Here’s a segment from the introduction that expains the usefulness of such a night vision system:
The 82.5 degree high resolution night vision system (HRNVS) module developed by SA Photonics is shown in Figure 1. This design was driven by our goals to 1) improve resolution, 2) reduce weight, 3) improve center of gravity, 4) reduce forward projection and 5) reduce peripheral obscurations compared to existing conventional wide field of view night vision systems,  while providing the advantages of a digital night vision system.

HRNVS utilizes two solid-state digital night vision sensors per eye and couples them to a single high-resolution microdisplay.  By  designing an eyepiece without tiles or seams, the user will have a panoramic view of the night vision imagery without the visual distractions caused by using multiple displays or eyepiece optics per eye.