Machines on treads are always cool. From tanks to the DTV Shredder we featured last year. From the mind of an inventive pair now comes the Skizee, an extremely trimmed down answer to the snowmobile. There are a few things you should know about it before hopping aboard one of these in the snow. 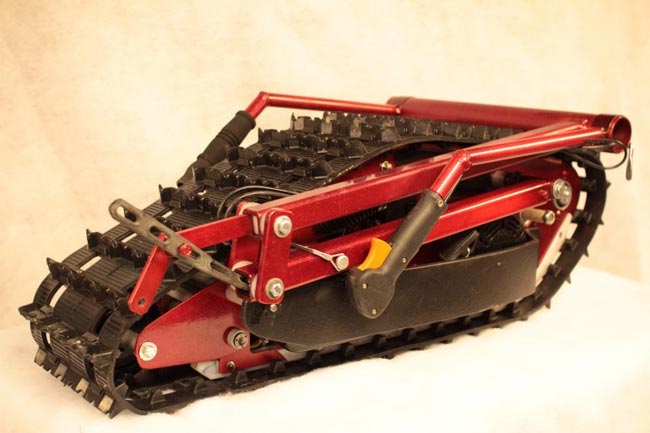 First, you don’t hop aboard the Skizee. You ride in front. The Skizee pushes you, see.

Second, this baby is really fast (although noisy), on the snow. So fast, in fact, you can wave at skiers as you zip by them at an astonishing speed.

Third, since it’s a fresh invention that has yet to see the light of a full-fledged release, the Skizee won’t retail until it’s gone into production.

Okay, now that the important points have been enumerated on to the all-important specs:

The maximum speed can reach 35 kph, with range at 40 km per 3.8 L gallon of gas. Inside its aluminum frame rests a 10hp 4-stroke combustion engine.

The invention by Jim Maidment and Tim Park is expected to cost upwards of $2,000 when it’s released. A final reminder: The Skizee isn’t meant for a pleasant zip across a beautiful icebound landscape. It’s a rugged machine for rugged and isolated places. Like Sarah Palin’s Alaska. The state, not the reality show.