Total Immersion have released details of a new augmented reality application for Apple’s new iPad 2, which is called AR Magic Mirror, and the app will let you change your appearance and also your friends appearance using the built in cameras in the iPad 2.

You can see the AR Magic Mirror app in action in the video below, it certainly does look like a lot of fun to use, and we suspect this will the first of many augmented reality applications for the new iPad 2. 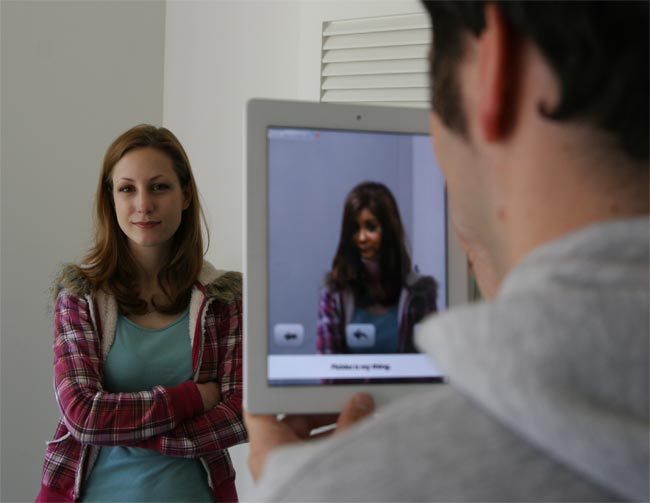 AR Magic Mirror was built using Total Immersions D’Fusion platform, and the company has said that this is a preview of things to come for the iPad 2.

This second generation iPad will be a key enabler to what we will soon see in a massive range of powerful augmented reality applications.” said Bruno Uzzan, Co-founder and CEO, Total Immersion.  “With the portability, processing power and broad consumer adoption of the iPad 2, a simple face tracking app today could soon become an essential makeover tool with beauty products at retail.  Likewise a traditional game of online chess could become a massive, multiplayer game in the real world playing alongside vivid 3D characters and environments.”

We are looking forward to seeing what other augmented reality applications are developed for the new iPad 2, we have already seen quite a few cool ones for the iPhone 4 and suspect there will be a lot more for the iPad 2 over the next year.