British designer Jullian Preston-Powers has designed an ingenious new helmet that could save the life’s of bikers and military personnel.

The ThermaHelm is constructed from carbon-fiber and has two lightweight chemical packs :one containing  water, the other containing ammonium nitrate. Which are built into the lining of the ThermaHelm. During a impact the two packs break and mix, creating a cooling reaction around the head. 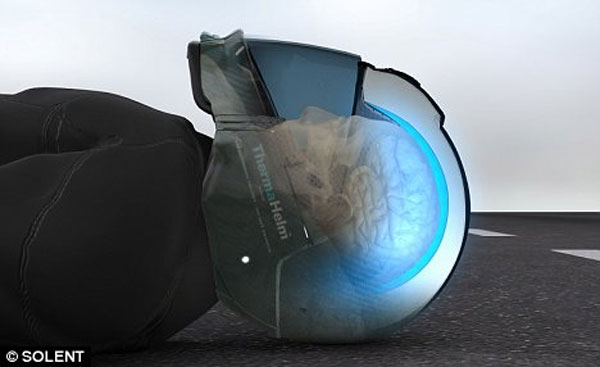 The idea came to Julian during a basket ball game.

“I had smashed my elbow on (my friend’s) head,” he says. “Someone handed us both ice packs for our injuries, and it was so cold I couldn’t hold it for very long. So I placed it in my friend’s motorcycle helmet and he accidentally put it on while the pack was inside. He was surprised by how good it felt and that’s when I had that eureka moment.”

The ThermaHelm Ice Pack Helmet will be released in the UK during May for around $490. Development has already started on a new model which will include a video camera, GPS and Bluetooth for around $815.