You don’t need a degree in physics to figure out how the concept below works. The spiral configurations holds down more ink, simple as that. What’s really a headsratcher is, after decades of having the ballpoint pen around and manufactured in limitless numbers, why didn’t nobody ever think of this? 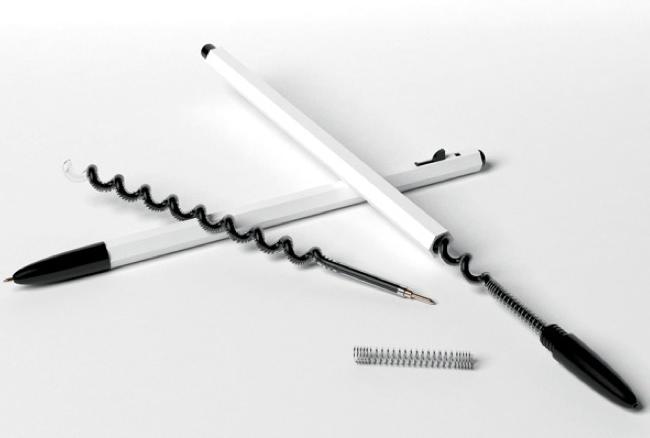 If a few hipster stylus snobs are poo-pooing (perhaps even pew-pewing) this minor innovation, to heck with them. Ball pens are awesome, whether for jotting down last minute notes or scrawling vulgar graffiti on desks, the ball pen will never go away—until we learn how to write stuff in thin air.

Dubbed the T&T by a supergroup of South Korean designers (South Korea is really catching up, isn’t it?) the only foreseeable concern with this is whether it prevents the dreaded ball pen diarrhea, also known as leakage. You know, like when the pen oozes the icky ink and ruins your crisp office shirt or an innocent pant’s pocket?

Right now the T&T ball pen concept is fighting for its life in the iF concept design competition. Hopefully the idea of a spiral ink container for pens catches on from there.

Here’s a question for the readers. No prizes, no congratulatory email, just smarty pants bragging rights: What year did ball pens change the way we jot down stuff? (Clue: It’s a post World War 2 date.)