The idea itself is pretty neat. How do you make a toy of the mythical flying horse, well, fly? Perhaps using technology developed for robot hummingbirds could work, but that would be too expensive. Solar power, then? 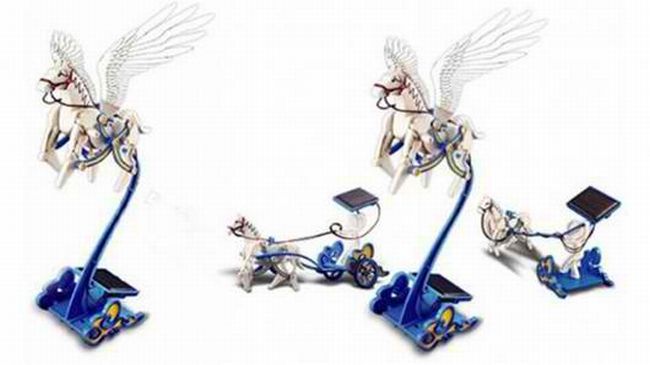 Solar power it is. Not on the wings though. The Solar Pegasus is attached to carriage that has a small cell that you can charge with a 10W bulb indoors. Is that enough juice for the horse? More than enough for its stiff robotic motions.

The Solar Pegasus arrives in a box and has three configurations. One has the winged horse pulling the carriage, another in mid air, and still another just going around in a circle. Either way, the horse will be a flapping so long as a light source is available to power its faux flight.

Though the Solar Pegasus seems right for our eco-conscious/energy efficient era, we must draw the line when it comes to aesthetics. This toy simply reeks of ugly. Look at it: a cartoonish design married to a poor color scheme and mechanical functions that have no grace in them. Ugh!

If you’re a sucker for kitsch and toys that are a real head scratcher the Solar Pegasus will set you back $56.