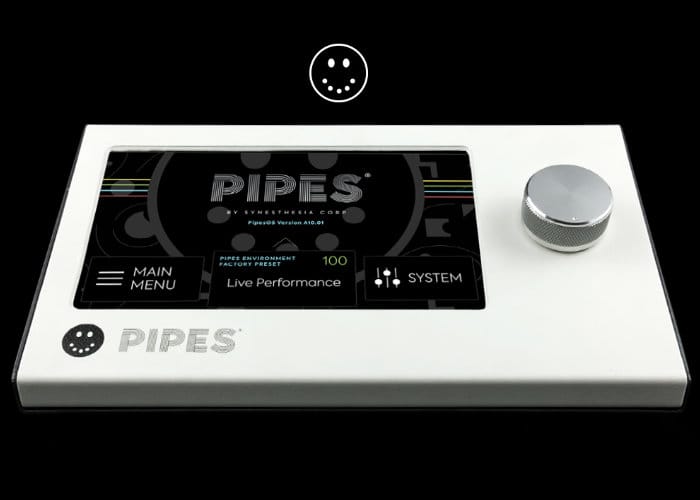 Based in Los Angeles California at Synesthesia have created a new music performance machine designed for both stage and studio which offers a more powerful way to control both digital and analogue outputs. “Pipes is a new audio platform which out-horsepowers a laptop, outperforms any sample player, and built to get even better over time.” The first working prototype debuted in January 2018 at the NAMM show in California and has since then been refined to the device in the video below.

Watch the demonstration video below to learn more about the Synesthesia Pipes system which is taken to Kickstarter this month and already raised over $60,000 thanks to nearly 150 backers with still 29 days remaining on its campaign. “Based on groundbreaking core technology, Pipes is new category of machine for creating music and performing live. It has the convenience of a touchscreen tablet style interface, the flexibility of an open source software platform, and the durability for going onstage night after night. Best of all, it’s priced at half the cost of the latest smartphones and updates are free forever!”

Features of the Pipes music and performance control system include :

– Choose between two versions with the exact same specs and functionality, the ONLY difference is the amount of onboard storage, either 32GB and 128GB.
– Pipes comes pre-loaded with a large onboard library of pristine, original, high-quality instruments, loops, and sounds. Getting started is simple-plug in your USB MIDI or 5-pin MIDI device and start. Tons of presets included!
– Pipes is created for musicians of any skill level or experience. Professional sound designers, bands, DJs and performers will love the power and flexibility of Pipes. At the same time, those just beginning their journey will enjoy how easy it is to get started simply by exploring all the onboard instruments.
– Import, manipulate and play your own samples. Pipes supports ALL major formats including these: WAV, AIF, MDA, EXS, NKI, SFZ, GIG. Pipes is fully MPE compatible as well!
– Pipes’ entire sound and instrument library loads at startup and can be triggered instantly, thanks to our patented audio engine powered by our unique Parallel Access ZDL technology. Parallel Access means your entire library is always loaded and ready to play. Switch between huge multi-GB instruments or sample sets immediately or play them at the same time! ZDL stands for ‘zero discernible latency’ which means the time between triggering the sample and hearing it play back feels instantaneous without any lag or delay. Even the world’s greatest drummers can’t tell, because ZDL was developed with their help!
– Pipes comes pre-loaded with custom Tweakers which allow you to manipulate audio before it triggers. Advanced users can build their own custom Tweakers using the open source Pure Data visual programming language.