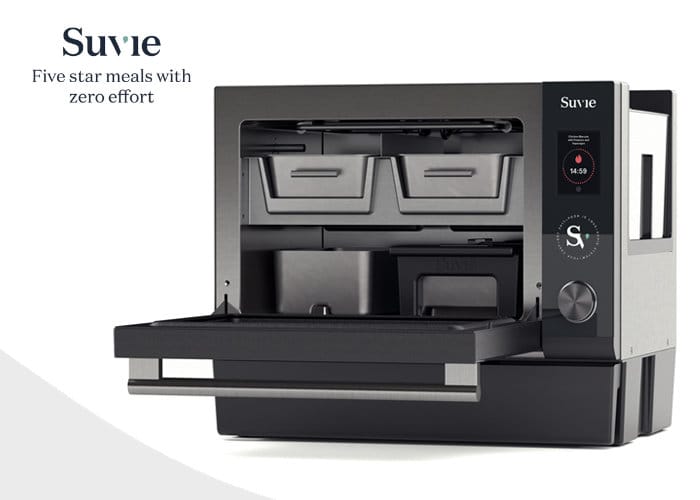 If like me you sometimes just can’t be bothered to cook a meal, or would rather use your time on activities other than cooking. You may be interested in a new robot cooker launched via Kickstarter this week, named Suvie. The Suvie robot cooker has been designed to store, cook and prepare five-star meals with zero effort on your part. Check out the demonstration video below to learn more about the unique robot chef and it’s development team which have already raised over $335,000 via Kickstarter with still 27 days remaining on their campaign, thanks to over 647 backers.

Suvie is a wireless-enabled countertop multi-zone cooker and refrigerator, which transforms four compartments full of quality food into a “perfectly cooked restaurant quality meal”. The Suvie team does all the work of shopping and prepping the ingredients for your meal. Which are then supplied to your home for you to place inside the robot cooker, with minimal clean up afterwards and servings big enough for 2-4 adults.  The robot cooker will automatically keep your food refrigerated until it’s time to cook allowing “working professionals and parents” with little time or skills to cook meals, the ability to easily keep themselves fed without huge expense when compared to takeout or restaurant meals.

The Suvie robot cooker has been created to provide gourmet meals from fresh, raw ingredients and has been designed by a former Apple engineer appliance expert and gourmet chef. Pledges are now available from $479 offering a 20 percent saving off the recommended retail price of $599. For a full list of all available pledges and full specifications jump over to the official Kickstarter campaign page by following the link below.