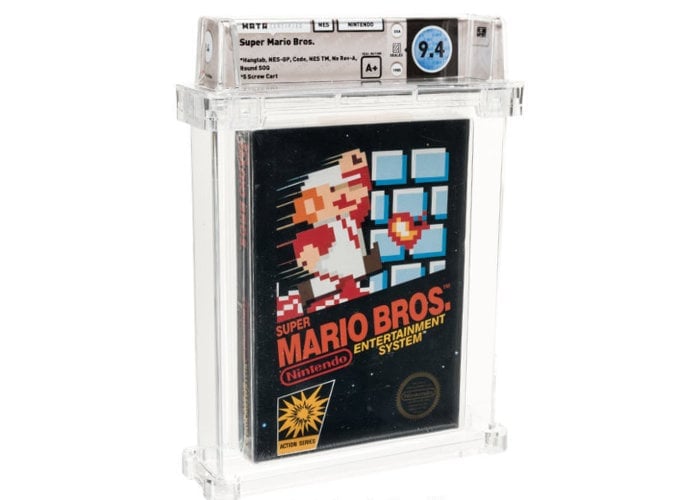 A sealed copy of Super Mario Bros. for the Nintendo NES games console has sold for a staggering $144,000 making the most expensive video game. The platform game developed and published by Nintendo and the successor to the 1983 arcade game, Mario Bros.was first released in Japan during 1985

The game was designed by Shigeru Miyamoto and Takashi Tezuka as “a grand culmination” of the Famicom team’s three years of game mechanics and programming.

“The aggressively size-optimized profile was intended as a farewell to the Famicom’s cartridge medium in favor of the forthcoming Famicom Disk System, whose floppy disks temporarily became the dominant distribution medium for a few years.”

“Super Mario Bros. – Wata 9.4 A+ Sealed [Hangtab, 3 Code, Mid-Production], NES Nintendo 1985 USA. Black box aficionados are often captivated by the appeal of the elusive sealed with hangtab variants. From what we witnessed in our May Signature Auction just a few months ago, Super Mario Bros. is no exception. A Wata 8.0 A Sealed copy of Super Mario Bros. with a cardboard hangtab sold for a record-breaking $40,200. Considering the grade of this copy, we can only imagine the kind of competitive frenzy it will spark amongst bidders.

In short, a cardboard hangtab copy of any early Nintendo Entertainment System game brings a certain air of “vintage” unrivaled by its successors. Super Mario Bros. was one of the launch titles for the NES console in the US, and is the highest selling game on the console of all time. It marks the first game in the Super Mario Bros. video game series, as well as the first appearance of Mario’s archnemesis, Bowser. This copy will surely serve as a centerpiece for the discerning collector, and is not one to miss out on.”