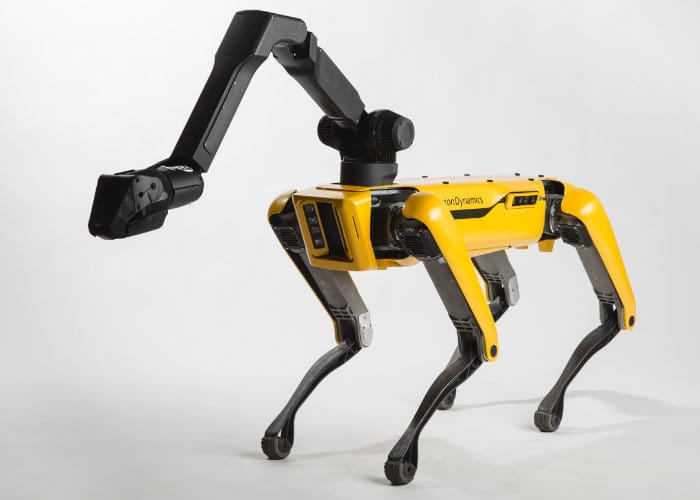 This week robot development company Boston Dynamics have released a new video of their door opening SpotMini robot contending with a human equipped with a hockey stick. The human is tasked with stopping the robot from successfully navigating the door and even resorts to pulling the tail of the robot to throw it off balance. Check out the latest video from the Google owned Boston Dynamics robotic company showcasing the current developments in AI and what their small robots are capable of.

If you are not familiar with the SpotMini robot, the artificial intelligent machine is a small four-legged robot that can be either controlled by a human or commanded to carry out actions such as opening doors and navigating obstacles. Weighing 30 kg the SpotMini robot is capable of carrying a payload up to 14kg in weight and is equipped with a 3D vision system providing perception. Allowing it to manipulated its 17 joints to navigate a wide variety of different obstacles using its canine inspired limbs. The robots internal battery allows it to operate for approximately 90 minutes on a single charge and SpotMini is the quietest robot Boston Dynamics have ever constructed.

As in the video above the SpotMini robot can be equipped with a arm and claw that is capable of providing 5 degrees of freedom. For more information on the SpotMini jump over to the official Boston Dynamics website by following the link below.