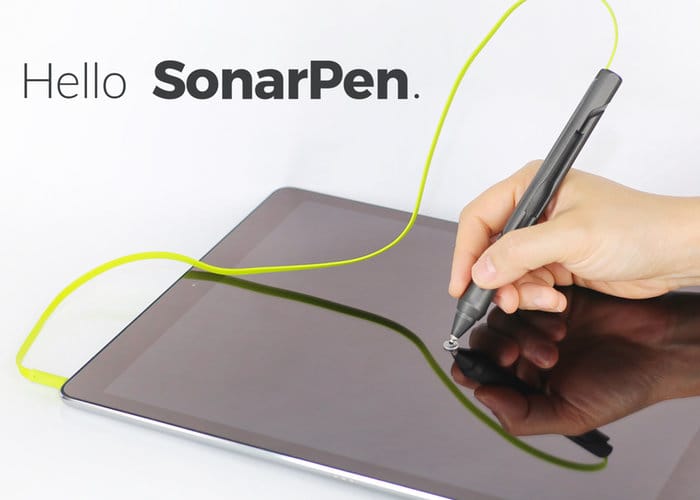 If you have an older iPad that doesn’t support the new Apple Pencil, there is no need to worry as there are plenty of styluses available to help you sketch and take notes even on older Apple touchscreen tablets. GreenBulb has this week launched a new smart pen specifically designed for iPads called the SonarPen, which requires no battery yet offers pressure sensitivity, and is supported by all iPads. Watch the demonstration video below to learn more about the SonarPen which is launched via Kickstarter this week to raise the £18,300 required to take the project into production.

Unlike other iPad styluses the SonarPen connects to your 3.5 mm audio port making it ideal for older Apple devices, as well as being priced very competitively. The development team explain a little more about the inspiration behind the new iPad stylus that offers palm rejection, pressure sensitivity, requires no batteries, works on all iPads, includes a shortcut button to your favourite commands and even a magnetic pen holder which connects the stylus to your iPad when not in use. “Current smart pens on the market are expensive. Some only work with the latest iPad Pro models. This bothered us for a very long time, so we created a smart pen that’s more financially accessible for everyone.”

SonarPen is now available to back with pledges starting from just £11 and delivery expected to take place during June 2018 if the Kickstarter campaign is successful. For more information on the SonarPen, full specifications and a list of all available pledges jump over to the official Kickstarter campaign page by following the link below.